i made curry chicken noodles.

looking at my previously blog posts, i served curry chicken noodles to my RI friends-

the curry chicken noodles were good on both counts. i guess they were served in very small amounts with more of other dishes provided. 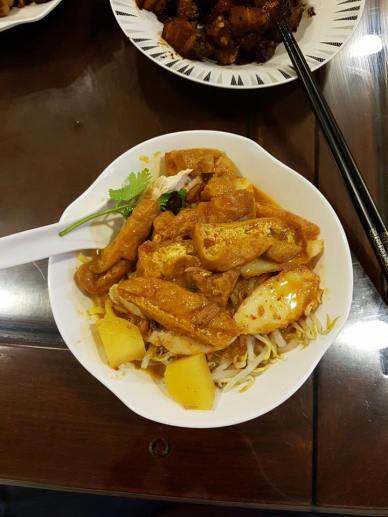 chicken & duck were good but noodles a bit disappointing, not enough soup & not spicy & tasty enough.

taupok & egg good, tau kua ok, tau you bak quite good when i took some leftovers, but last evening some parts skin were tough.

veg was not good.

we were chatting on FB afterwards, & i shared-

i used 18 dry chilli..nearly double c/w my usual nonya curry chicken..this though is like a soup NOT gravy so quantity is more than 2x usual probably 3x (my usual gravy)..i used bones from 3 chicken as stock..the soup was actually very tasty though (still) not spicy..however when noodles added taste much diluted..actually the taupok though infused & tasty seemed to take away & dilute the taste of the soup oso…so looks like got to have double the amount of soup or 1/2 the amount of noodles in order to get the taste right.

braised duck was good this evening.

i took out some noodles from the curry chicken noodle bowls & served 2 bowls of duck noodles to 2 friends.

i shared in the same FB chat-

so just need to rub the duck inside & outside with 2 tbsp sugar, add whole bulb of peeled garlic plus cut ginger, cover & baste the duck (about 2kg from giant) for 1hr 10mins.

duck was tender & flavourful (the lor was very “pang”). 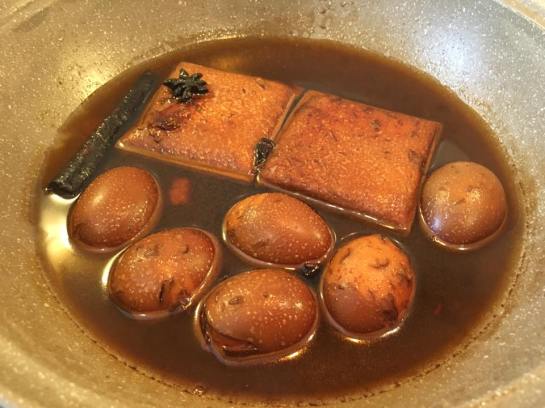 & i used that to make the lor nerng-braised egg and tau kua. 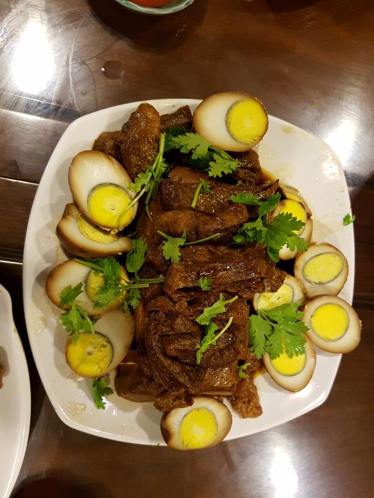 lastly cooked the taupok strips & placed over the tau kua.

for tau kua i think they need to be taken with some sauce, so i should add more sauce when serving next time. 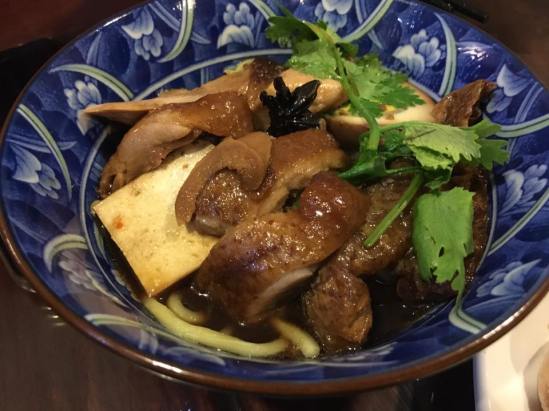 i used some of the sauce to make 2 bowls of duck noodles. 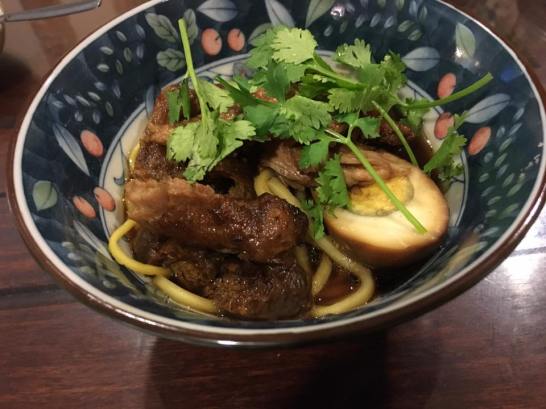 so basically the trick is to add enough soup for the noodles so taste would not be diluted=either more soup or more achievable, less noodles. 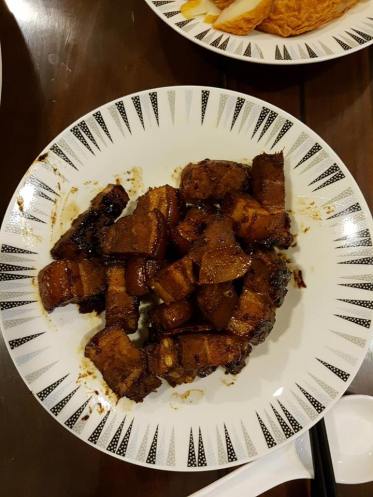 though i have made i knew were excellent very tender tau you bak in large quantities for teban gardens & also bread of life community meals, today one piece i tried the skin was tough. though i had 2 pieces the next day & they were all good & tender.

chicken as usual was good.

i added a bit of tumeric to make it look yellow. this what the hk chefs did for the 黄姜鸡 say at crystal jade kitchen.

i deboned the chicken.

& plated it for adding onto the curry chicken noodles.

as shared earlier, i had 18 pieces of dry chilli (& 300ml coconut milk), so colour was good, but still not spicy so i will have to add chilli padi next time.

the soup was actually very tasty, but because there were not enough for the noodles, it became quite ordinary. this part need to manage & i will have to reduce noodles to 1/2 or 1/3 for serving in future. it is difficult for me to make more soup.

it was not really a bad noodles. 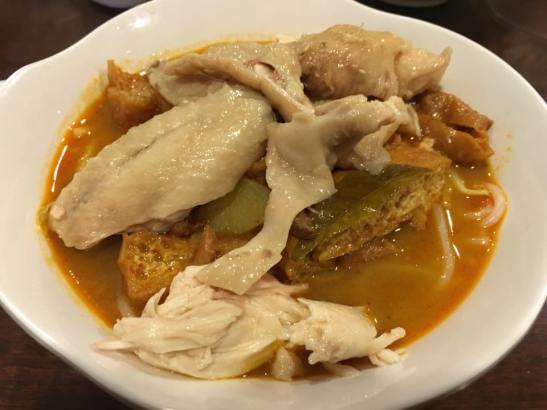 but i was not worth the effort, & boiling the bones of 3 chicken for like 15hrs over 2 days.

my friends brought many things.

especially the homemade “better than outside” durian mooncake…one friend brought back for his wife daughter, the rest start announcing father, mother, son…

& another the tea & cutie mooncake (above photo).

we had karaoke afterwards just connecting the pc youtube to tv. had lots of fun.

curry chicken noodles not to my satisfaction, but overall still great fun to get together with good friends & primary school classmates of 51 years from OPS.

another unsuccessful attempt to have frog porridge at G7 sinma this evening.

no parking lots, lots of cars.

running out ideas where to go for light makan, then remembered i have groupon vouchers. so called up & got an outside table for 2pax at sixty40 @ rochester mall on 16.9.2016. ^^.

groupon voucher for 2pax entitled us to 2 alcoholic drinks, but not cocktails.

i got a ballantine whisky & wife got a white wine. both are lousy, quite expected for the groupon price la. 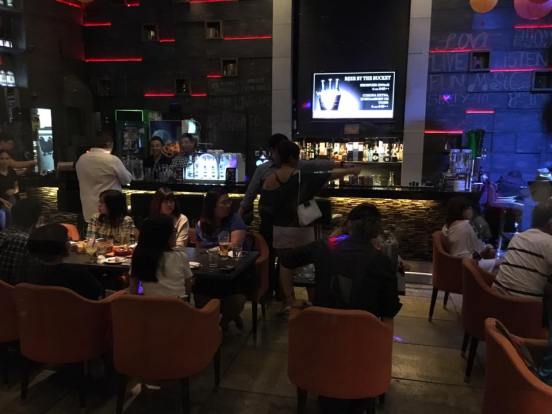 place has nice ambience, both inside & outside.

there is life music wednesday to saturday.

it was more fun to sit outside. 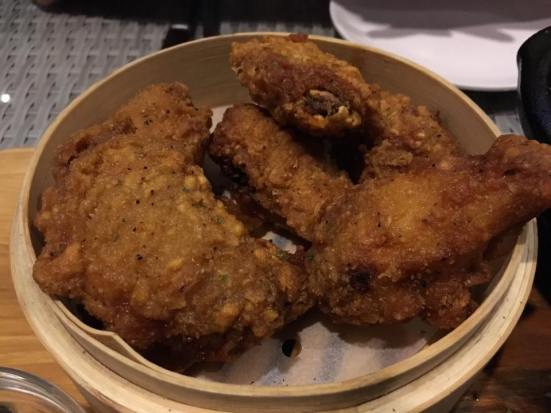 we ordered 3 tapas for the applicable menu. 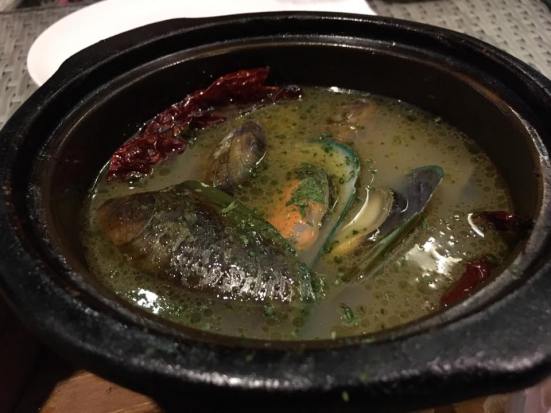 they had the cheap local mussels which was tough not so succulent.

but soup was great. so preparation ok good standard just the ingredients not the good mussels.

don’t know if i can make this pork ribs. i think louisiana. pork rib was tender & very tasty, smokey flavours.

not sure if it was just marinade or because of using a smoker or bbq. i can experiment the marinade & recipes but not do the smoking.

the deal expired now but guess it will come back. won’t mind having it again. 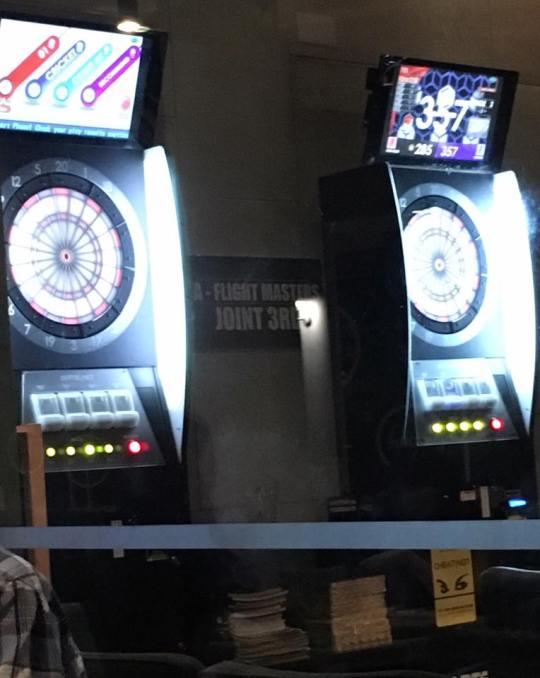 they have dart boards inside. some people were playing. 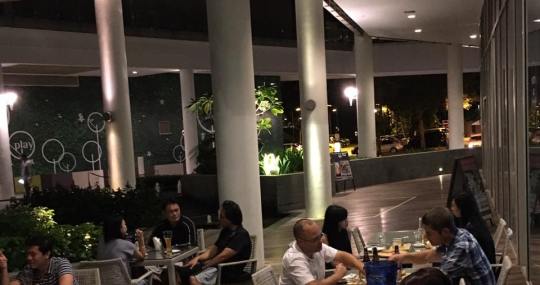 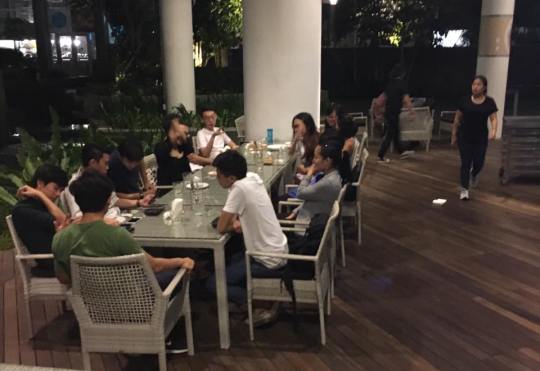 & nice ambience at the tables outside.

bar food not exactly my most preferred. but i quite enjoyed this evening. good tasty food with wonderful ambience.