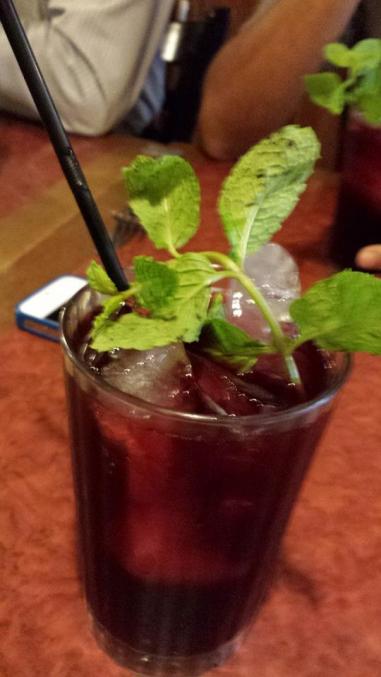 parking was horrendous at 1pm on a friday. 😦 after turning a few rounds, and finding no space at the roadside parking & the 3 open carparks and lots of traffic on the small roads, i got over to park at sultan plaza. anyway it was just a short walk. i was 10minutes late as in my whatsapp message. my 5 friends were already at the table. this happened a bit more often lately, i must not make this a habit, parking or traffic aside. 🙂

the recent reviews  (2014) on tripadvisor of this place were quite bad. the reviews on openrice & hungrygowhere were equally bad but more dated (2013).

i checked the website & they had this S$15.90 lunch set so i called & confirmed the lunch sets were still available & that it was 2-course + drink.  you need to ask for the set lunch menu though. we were not given until we asked specifically.

for the drinks, 2 friends had coffee, 2 including me had the hibiscus drink. it tasted like a rose syrup with nice mint, sweet but not overly, it was quite ok for me. 2 other friends probably had tea. i couldn’t quite recall. 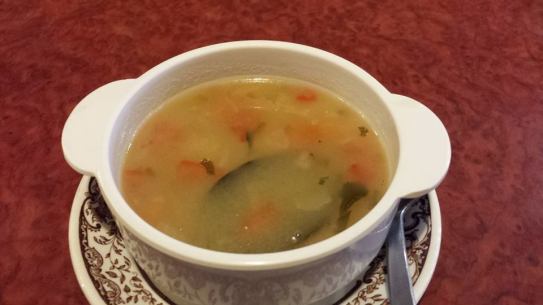 the soup of the day was a chicken soup. it was better than a canned soup – i guess very few served canned soup these days. basically a minestrone with chicken stock, mediocre but a pretty ok soup actually.

there was a choice of mains. i picked chicken kebab with rice. chicken was tender & had grilled flavours but otherwise not much taste. the sauce added nothing to the taste. the vegetables – cauliflowers, carrots etc were just boiled vege. rice? not much taste.

the lamb  kofta with rice seemed quite ok too. basically a minced lamb kebab? they were often served in indian buffets, not really my kind of dish, but perhaps if done well with herbs, it could still be better than the chicken?

a friend who is vegetarian took a vege wrap with fries.

at S$15.90 which came to about S$18+, i guessed nothing much to complain about, and food was actually a bit more than passable.

the 6 of us were the solitary patrons. f&b is really a struggle in singapore with so much competition.  if i were to use the criteria we recently talked much about – worthwhile cholesterol & worthwhile calories, then this lunch didn’t really fall into the category. so far for indian food, the best i had was the S$19++ weekday lunch buffet at yantra at tanglin mall, though it is a bit more expensive. but i guess many restaurants in serangoon would serve cheaper & tastier food than amirah’s grill. i don’t know much about middle-eastern restaurants so cannot really make comparisons. i did have a most memorable middle eastern lunch at honey & co london with my son during my recent trip.

we had great fun. i really enjoyed these lunches & dinners with old RI friends. ambience was fine. we had the whole place to ourselves & we stayed & chatted for quite long after makan. 🙂