Kurama and Kibune are small towns in the hills north of Kyoto & excellent for a short day hike. It is just 30mins ride on the Eizan line from Demachiyagi Station, and about 1 hr all-in starting from (say) Gojo. 🙂 the hill is only 266m and the hike distance is about 2.6km and can be comfortably completed in 1.5hrs (though in our case we took 2 full hrs). 🙂

we started late and decided to take an early lunch along Kawaramachi so we got a 600yen subway pass & took the subway to Shinyakusomae station and walked down Kawaramachi. we found a cheap eat Yayoiken (see  Great Affordable Eats @ Kyoto) and took a 690yen bento lunch each.

we then took the Tozai line to Keihan Sanjo station and changed to Keihan line to Demachiyanagi station & hop on the Eizan line for a 30mins journey to Kurama. 🙂 the train carriage had a few rows of seats facing out the windows. we could see momiji (maple trees) right by the window as the train passed. one needed only imagine how it would be like during autumn koyo (falling leaves) time. At Kurama station there was a poster of the Eizan train driving through the myriad of autumn colours. 🙂 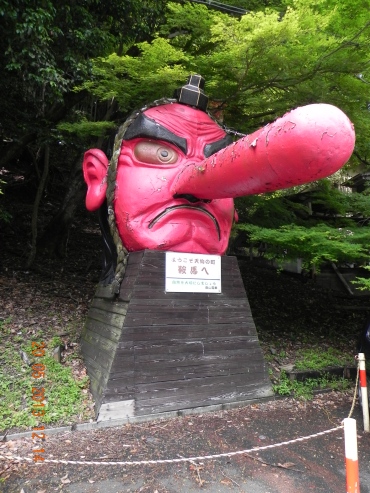 we started the hike from Kurama side. 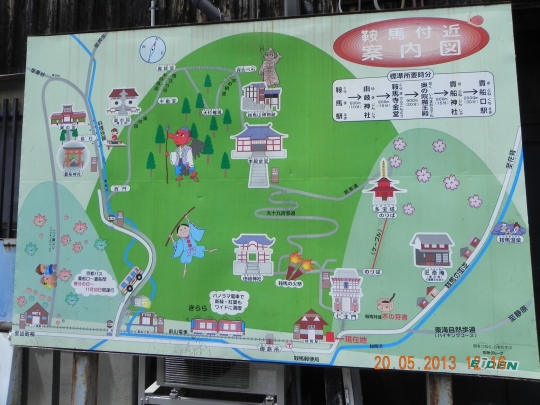 there was a 200yen entry fee (爱山费) at Niomen (仁王门) head of the trail from Kurama side. we did not take the cable car which was just a very short ride & cost 100yen.

the entire hike was largely shaded even though it was a hot day. we were armed with the usual bottled tea from the vending machine, liquids were something important to have. 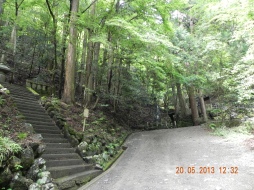 the hike was really pleasant with some steeper slopes and stairs, though it was a bit tiring for my sis.

there were lots of maple of course (but we already knew that the best time for visiting Japan were during autumn and sakura, so we could only imagine the autumn colours but it was expected and ok). there were lots of giant cedar trees.

we reached Kuramadera, the main temple. 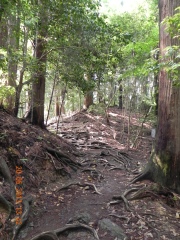 we reached the top. there was clear direction signs with distances to Kurama & Kibune. 🙂 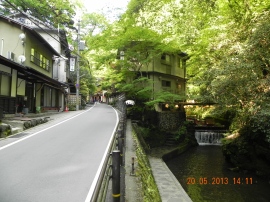 we reached Kibune about 3.11pm (Japan Time – camera is set to Singapore time), about 2 hrs after we started. 🙂 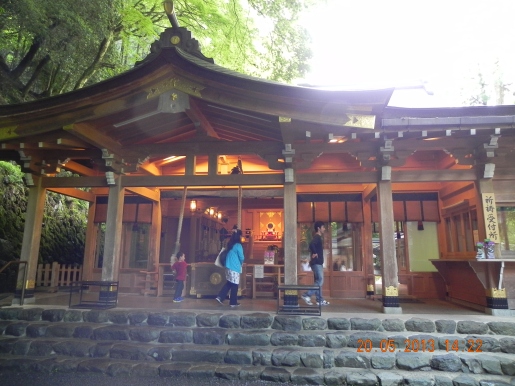 we climbed up to Kibune Jingu (贵船神社). surprise surprise they had free wifi…useful if unusual. 🙂

Kibune is also popular for its kawadoko dining, where you sit on some floormat platforms secured over the flowing river beneath and watch the rapids & falls. some say the temperature can be up to 5degC cooler than ambient.  there is also the  nagashi-sōmen (流しそうめん flowing noodles) where you try to catch somen flowing really quickly down a bamboo pipe & dip in sauces like you eat cold soba. 🙂

while we were walking along Kibune river side where all these restaurants were located, there were hardly any customers. perhaps this was not the season & the costs was quite high.

anyway we walked along the Kibune road by the river and came upon a bus station where we paid 160yen each and got to Kibuneguchi station to catch the Eizan train back to Kyoto. 🙂