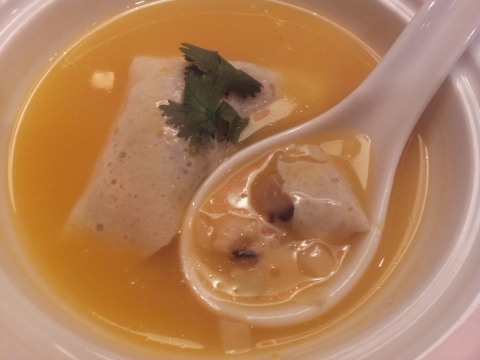 I had not tried Xin Cuisine, despite it being included in Amex Palate dining privilege for a while already. and though I did have intention to try out the food here using palate discounts, it was ANZ card marketing that got me to ask about this lobster & abalone 1 for 1 menu. We were still not sure though, as you could not really tell by menu alone the quality of cooking, so when we got ourselves seated I studied the ala carte menu a little in addition to the the promotion set menu below (which as it turned out payment could be made by any credit card). 🙂 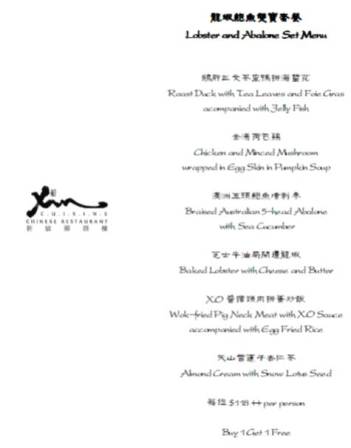 We had always felt that Majestic offered the best Chinese fine dining set, and others like Tunglok could not compare on a price vs quality of ingredients & quality of cooking basis though it might be a bit more debatable when comparing fine dining over the whole ala carte menu & ambience etc. For us though since quality of cooking pipped the other considerations, we had more confidence that a dish in Majestic would turn up tasty c/w another place (and of course as justified by the price).

On this occasion, we decided on the set menu, and it was a very good decision! 🙂 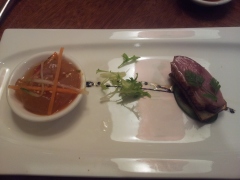 We started with a duo appetizer. There was a roast duck on a pan seared foie gras & cucumber (seems that Xin is famous for their suckling pig with foie gras), & a small saucer of thick spicy jellyfish. Both were very nice. The roast duck felt like a sous vide item, very tender & totally consistent. In terms of fine dining, it was no less fine than western fine dining. 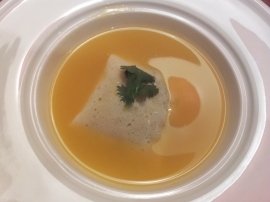 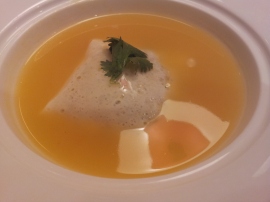 Next was chicken & mushrooms in a egg skin dumpling in pumpkin soup. This was very, very, very good. It was such a beauty to look at, and the soup was so very, very tasty, as good as Majestic’s 黄焖鱼翅 which was a lot better than Tunglok’s version. And the dumpling was so delicate to behold & so tasty to eat. Very few western fine dining restaurants here offered something this fine! 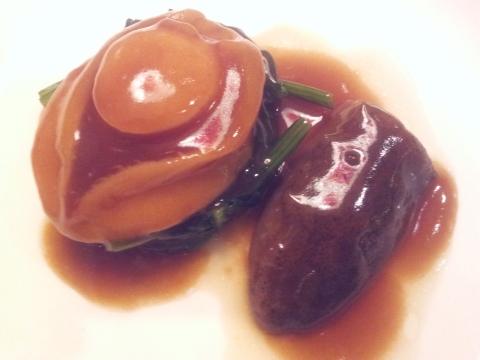 The next item was the 5-heads abalone on a bed of spinach with sea cucumber in brown sauce (5-heads mean the size is 5 abalones to 1 kati though I am clueless whether it is the HK old kati=600g or the China kati=500g. In China it is now 1斤10 两 & 1 两= 50g)。 This was as good as Chinese braised abalones went in terms of 口感 bite/texture  & taste. 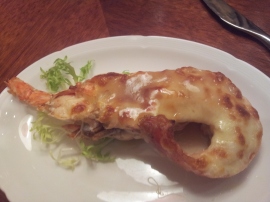 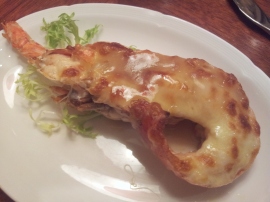 and there was the 1/2 lobster, done with a very light cheese gratin. The lobster was smaller (about 350g). My wife preferred the 上汤焗 style so cheese lobster not her favourite but I must say the taste was good & this was really very nicely done. This was a good illustration of quality of cooking – Chao Yue Xuan for example offered a larger 1/2 lobster in a good value set which we had recently, but the quality of cooking & presentation made a  huge difference between fine dining and not so fine dining. 🙂 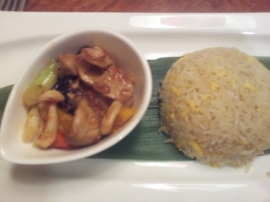 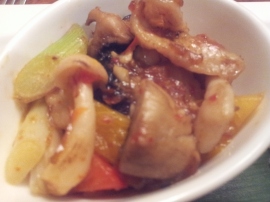 and then we had the egg fried rice & spicy pork & this very plain fried rice was very very good – such crisp long grains & so fragrant it was as good as Imperial Treasure’s crab meat fried rice with dried scallops & egg white which was our perennial favourite – & so both of us who avoided carbo mostly had to evoke our “worthwhile carbo” philosophy and finished up all the rice. The spicy pork collar was very nice too. 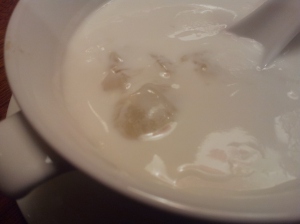 For dessert,we had the snow lotus in almond cream. Both of us were not very “dessert persons”, and cream 糊 was not my favourite & very less so for my wife. This though was only very slightly sweet & extremely smooth which was what defined a good 糊, be it almond (杏仁) or walnut (核桃) or combined (鸳鸯). I don’t remember eating snow lotus before – thought it was hasma but it wasn’t, texture was good. For us I guess it was an ok above average dessert but it was “fine” alright in terms of quality. 🙂