we were thinking of a place to go for 5pax family dinner on a friday w/o too much hassle on traffic & parking. decided to try the new restaurant aPompei at 6th avenue on 21.11.2014. 🙂

restaurant only started a week ago, according to chef mimo, who was from al borgo. we liked the florentine steak at al borgo by chef mim0. my wife recently had that at al borgo & she said it’s no longer good, so we were looking forward to having the good florentine steak here. 🙂

chef mimo was friendly & chatty, and we had always liked his food. so we decided to order his recommendations & let him organise the dinner. 🙂

food was good as we expected. price though was a bit expensive.

bread in most italian diners were mostly just baguette with olive oil/balsamic dip, nothing fancy like top restaurants.

the antipasti was a huge serving. it was good, with parma ham, good quality salami (my wife normally does not take salami but she was ok with this one), buffalo mozzarella, another cheese & olives.

we found out only later when we had the bill that the antipasti cost S$72 (since we left it in the hands of chef mimo). this was way too expensive for an antipasti for 2 guys & 3 ladies.

i am just guessing that maybe we were charged 3 portions=S$24×3. if we had ordered ourselves, we would have ordered just 1 portion. it was not about the price of the antipasti but whether we would spent S$72 for a very large portion or used the same money to order 2 more pastas etc. 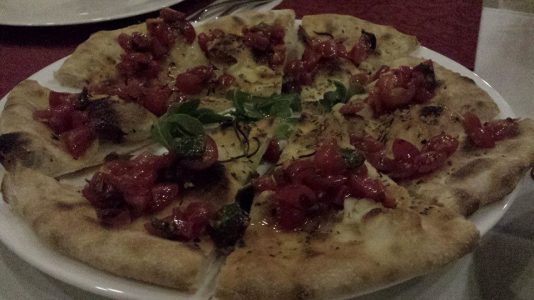 we had a complimentary focaccia, topped with cherry tomatoes. in fact we thought it was better than the seafood pizza. we saw on the menu it cost S$13. 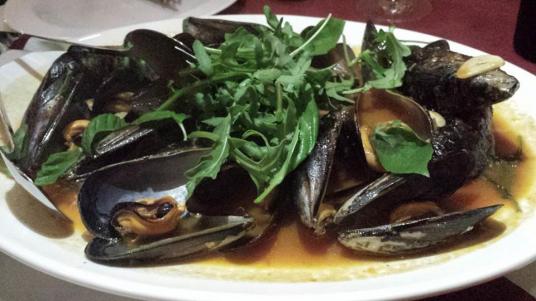 the mussels was very good. i felt it was expensive at S$28. i could do very good mussels myself, but i used the cheap mussels from sheng shiong. these mussels here were of course the better variety. 🙂

the vongole was very good also. the spaghetti were very al dente. somehow it cost more than S$24 on the menu? this is also a dish i do well, and sometimes i can get mango clams from sheng shiong which i think is better than la la (littleneck clams).

the seafood pizza was good, but we felt the cheaper focaccia (complimentary by chef mimo) was better. 🙂

& the 600g florentine steak. this was our favourite & it was as good as the one at al borgo of old (though my wife said it was no longer so). al borgo charged S$60 initially but raised to S$75 last year. it was S$88 here. i guess the price was not cheap but ok as long as the standard is kept. 🙂

chef mimo offered us 2 complimentary sponge cakes. the texture felt a bit like tiramisu (moist) but chef mimo said it was sponge cake. they were good but these tended to be quite sweet.

the dinner for 5pax (2guys, 3 ladies) cost S$350nett including a S$62 bottle wine. wine was good & priced similar to what you get at a good restaurant. 🙂

i felt the dinner was overly expensive at about S$56nett excluding the wine. if the antipasti was 1 portion at S$24++, price would be S$45pax nett, which was still not cheap but i guess ok for the food.

anyway, we were overall happy with the food, even though price was on the expensive side & it had cost a lot more than if we had ordered from the menu, which is what we would do next time. 🙂