Aburiya is my wife’s favourite yakiniku restaurant, and so it is mine. 🙂

We usually order karubi (short ribs – the korean galbi) and jo karubi (prime short ribs). Aburiya also has one of the best kimchi chigae and we also like the bibimen (spicy korean cold mixed noodles 拌面) and bibimbap (mixed rice 拌饭).  When the items add up  and if you order sake too, it is not that cheap, but it is guaranteed to be a thoroughly enjoyable meal. 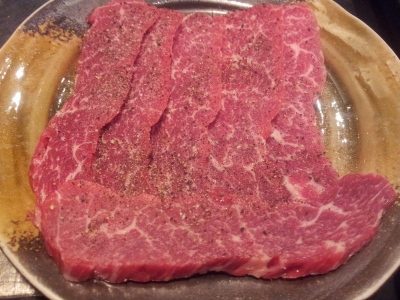 We also had the usual kimchi chigae. So far we liked this dish best here, even when compared with korean restaurants like Chang & Hyangtogol. The soup was very tasty and not too salty. There were a lot of kimchi & silky tofu but I would have liked a bit more of the belly pork. 🙂

We also had the kurobuta pork. There were quite many types & I could not recall which. It was very good, like a good pork collar meat with marbling giving it good taste plus the BBQ flavour.

and we had the bibimen also. I liked very much the sweet spicy taste of gojuchang sauce mixed with the vegetables and some chicken meat and the nice texture of the noodles. 🙂

What I did not like though was that for this evening, we were sat at a table where there was no sunken pit & the charcoal stove was placed on the table. The heat from the stove was quite oppressive! I would avoid that next time.