my wife & i were in between meals & decided to have “tea” (more of 2 meals dinner & lunch into 1, save time, money, calories..haha) @ sun with moon at wheelock. this is becoming our favourite restaurant. 🙂

we were not really interested in their tea menu. likely we were not the only ones so they provided full meal sets in their “tea” menu. 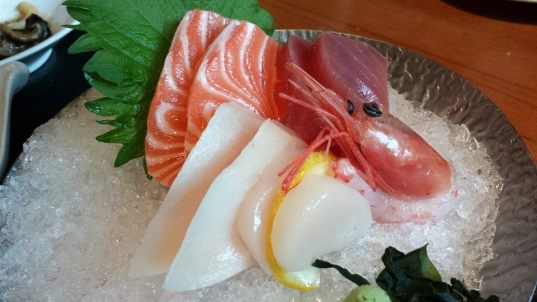 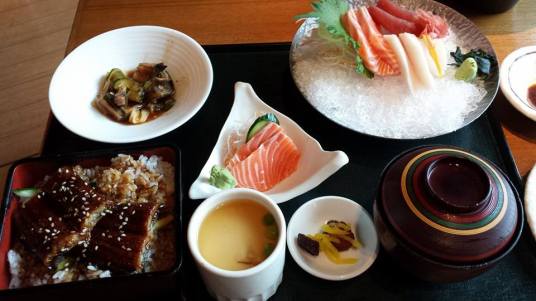 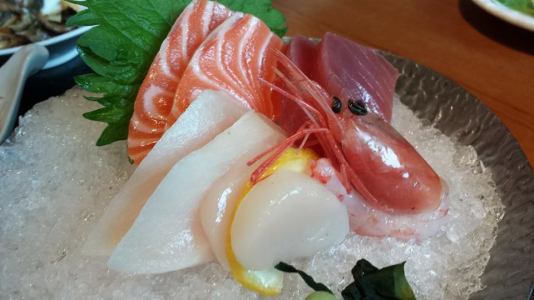 i was already thinking of the sashimi at sun with moon after the not entirely fulfilling chirashi don dinner at chikuwatei on 17.6.2014, so 1 ordered a sashimi & unagi don set S$34.80. we did not want to have 2 sets so we added another sashimi moriawasse for 2pax at S$29.80.

the sashimi moriawasse that came with the set had 9 pieces c/w with the ala carte sashimi for 2 (only missing 1 ama ebi & 2 slices of hotate in comparison) , and cost S$5 more. i would consider both quite reasonably priced & vis a vis each other. 🙂

as i mentioned on my post on chikuwatei, the salmon sashimi were sweeter, tastier here. the cut was also quite thick but perhaps just somewhat thinner c/w chikuwatei. the kajiki (swordfish) was a lot sweeter & there were ama ebi & hotate (missing in chikuwatei). for me it was a lot more shiok here. we also added a salmon sashimi side (3 thinner slices for S$3) & a chawanmushi (S$3.50). 🙂 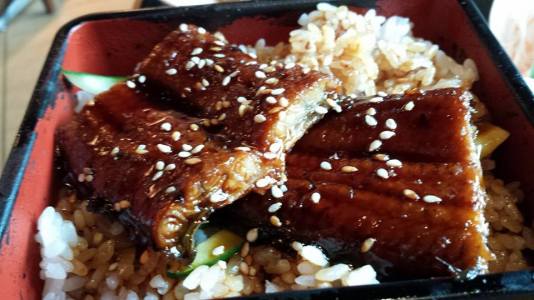 the set also came with the unagi don which i liked, side dish (vinegared unagi which my wife liked), soup, pickles & a drink.

there was a 15% card discount for ocbc, however it only applied to the ala carte order. since i had the members card (cost S$20 & you get back S$20 in points for redemption) which entitled to 10% discount for the whole bill, which came to S$82nett. its somewhat more ex c/w chikuwatei which was an overdose (not complaining!) of average to just above average thick cut sashimi for a S$25++ chirashi don.