daughter bought me an excellent squid-ink risotto at father’s day dinner at follia recently on 20.6.2015.^^

i really liked the flavours of the risotto with good shellfish stock, smooth & creamy. the proprietor told us later though it was butter & no cream.

so i thought i will do one with butter & no cream.

i do a very good squid-ink pasta myself but have not tried it on risotto.

i decided not to use browned garlic & alio olio flavours. i did not have chicken stock so i cut up 1 carrot, 1 whole yellow onion, some leeks leftover in the chiller & put in the crockpot overnight to make a vegetable stock. that should be enough with the squid ink & sauce from pan-fried squid. 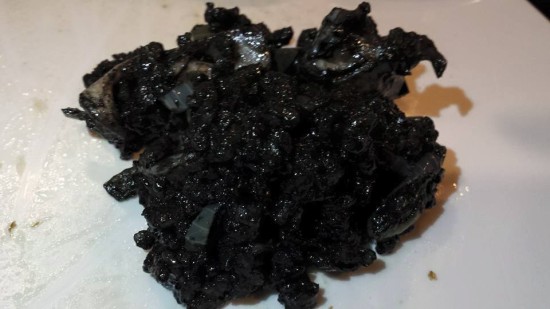 & it was an excellent squid-ink risotto, about same or very close to the follia standard.^^ 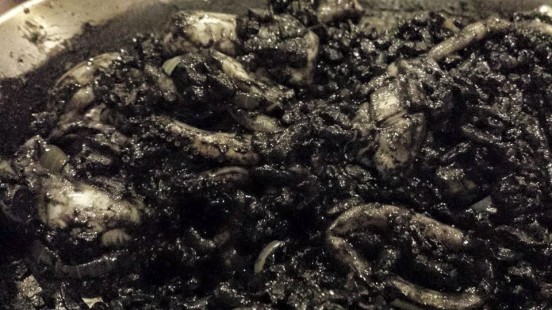 get enough squid ink – the normal elongated squid has very little ink so needs about 5 large squids, i happened to have a flat squid (cuttlefish) in the freezer & that has a lot of ink.

i had 2 medium squid. these were very thin, so i cut them in rings instead of the usual cross/chequered cut

i seasoned with fish sauce & white pepper & butter-fried the squid & set aside.

i added 1.5 cups of stock (including draining the sauce from the fried squid) to cover the rice & bring to boil

then i placed in a preheated 205degC oven for 10minutes. 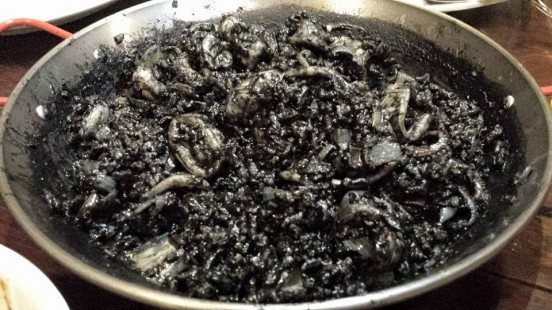 the rice would be like 80% to 90% cooked, centre still slightly hard not yet al dente. i added salt to taste. 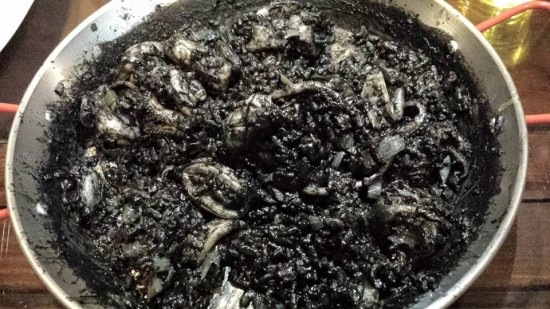 i did not read up any recipe, but i guessed the butter had to be added at the time of tossing, otherwise will be just boiling butter. 🙂

just like adding butter to toss for my mentaiko pasta. 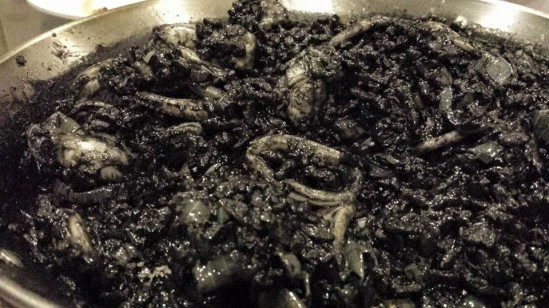 i added another cup of stock & boiled & reduced, checking that the risotto is al dente & not overcooked

then i added the pre-fried squid, again so that they were not overcooked & rubbery

i cut about 20g butter into small cubes, off the fire & toss the butter with the risotto

& it worked wonders. i say almost the exact same flavours & texture like what we had at follia.