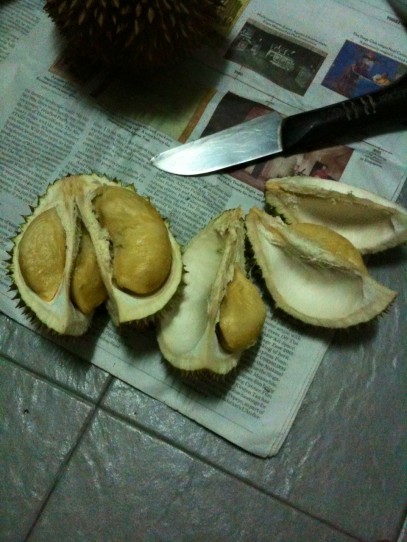 this friend is the meticulous planning big sister kind, thought of every details from what to bring (like backpack, extra plastic bag for durians, helmet/cap, mosquito repellent, sunscreen, towel & change etc), timing & taking the bumboats to the specific locations to find the best durians. 🙂

Due credit is given to these 4 organizers with their faces shown to the start of this album.

I was very impressed as everything was done with such meticulous planning and with such military precision.

We have our medical and safety officer, to ensure we would be well taken care of in an emergency.

Mmm ….without them,  I think we would have gone home bare-handed

i got up at 5am & was ready to leave for changi jetty at 5.15am. i was on the whatsapp & 1 friend could not make it last minute. as he was fetching another friend, i waited till 5.45am for the other friend to reply messages & come online in order to confirm the pick up location & time.

anyway in the rush we missed the turning from telok paku road to changi village road & went further along loyang avenue before realising & turning back. so we missed the first bumboat load of 12pax. our 12 friends who were there earlier left for pulau ubin (as earlier arranged to do..ie the first to make up 12pax proceed first).

when we were at the changi jetty, we were missing another 3 or 4pax before the bumboats will leave. the system is to wait for 12pax to fill up a bumboat (fare is S$2.50pax) unless you want to pay S$30 to charter the boat. 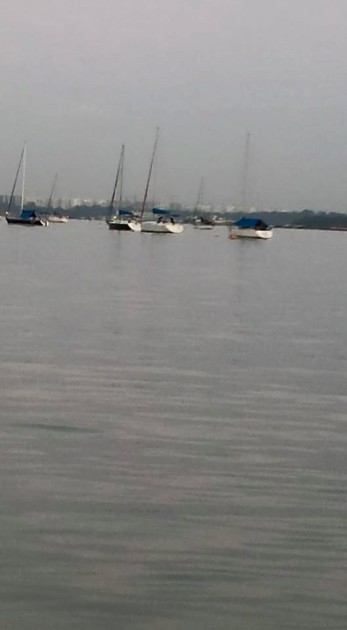 we were very shortly on the 10mins bumboat journey from changi point ferry to pulau ubin. 🙂

several of the passengers on the bumboat were talking about picking durians. they all came well armed with backpacks & plastic bags. ^^

we arrived at the pulau ubin jetty.

a friend came to meet us, and we took some photos.

there were many bicycle rental shops near the jetty.

our friends who came earlier rented the bikes. couple brought their own bikes.

11 friends who were biking took to the road first. 3 of us took a pleasant morning stroll behind. a very enjoyable walk. 🙂

from the jetty we walked to belatok hut then turned left to jln ubin batu.

too many durians but few good ones

we walked passed the yellow hut to the next junction. the cyclist friends were already collecting durians.

i went into one bush & found a durian soon enough. it smelled good. my friend’s hubby who is the expert among us said it was ok. later when we were selecting the good durians to bring home, this was not among the really good ones. we opened it. one part was ok good taste but thin not so creamy, the other parts were not fully riped yet.

too many durians but few good ones

we collected many durians. just 2 friends & i (3 of us together) collected like 20 durians, but maybe only 3 or 4 were good ones.

after picking enough durians, we proceeded to puaka hill. again the cyclist went first. we took a slow walk, and a drink at the rest stop. the group stopped at the bridge & took some photos. then we took some photos at puaka hill & at the hut below where some of my energetic friends attempted yoga stunts & headstands???

we walked back to the jetty. the main party of cyclists went further ahead and joined us at the jetty afterwards.

it was a wonderful outing. lots of fun picking durians & enjoying nature around us.

going back, we stopped near the jetty & had some drinks. we went to the rest room to freshen up & change. it was very hot day & a lot of perspiration.

picking durians at pulau ubin – the good ones

after discarding many durians, there were still a lot to bring back. 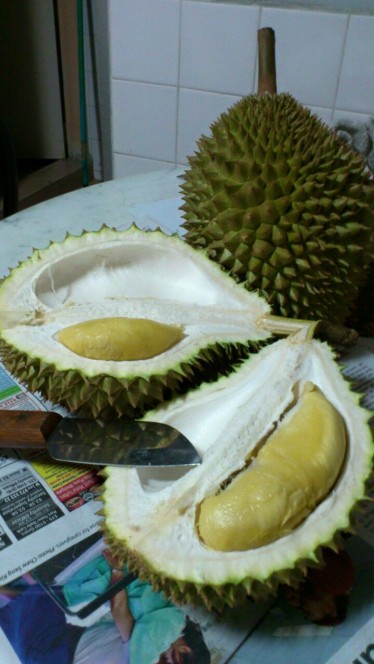 picking durians at pulau ubin – the good ones

i did not bring back any. but those who brought back, thanks to my RI friend & her hubby’s good guidance & pick, enjoyed very good durians.