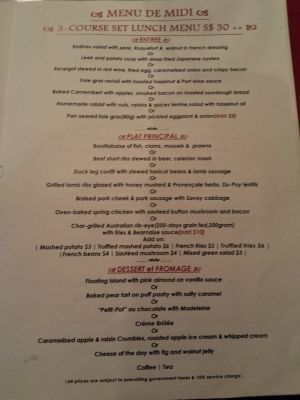 our dining quartet decided to take advantage of maybank 1 for 1 set lunch promotion & dined at bistro du vin on 18.11.2013. the usual price for a 3-course set lunch including coffee was S$30pax.  the menu had quite wide choices. there were couple items like pan-seared foie gras & 200day grain fed ribeye that required supplement – quite reasonable unlike some places where 1 in 2 items required supplement, however the supplement were separately billed & not entitled to the 50% discount. 🙂 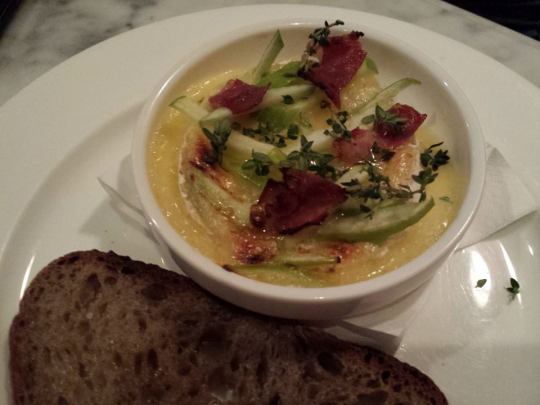 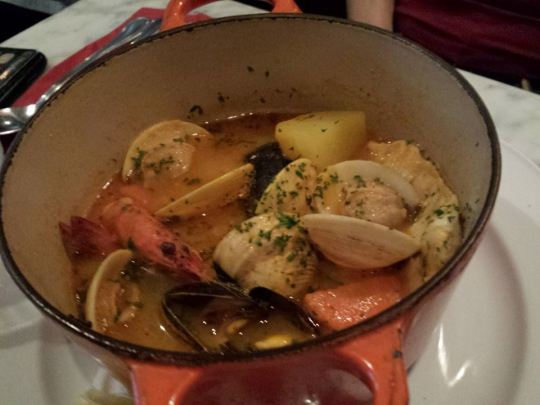 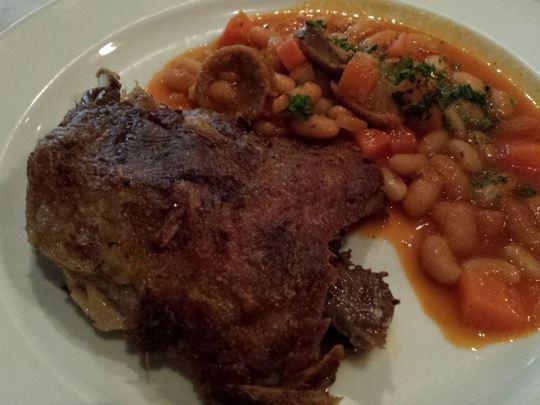 i love leek & potato soup (& especially this one came with 2 kaki furai – japanese breaded oysters). however i was distracted by the rabbit terrine & ordered that. it was good, tasty, competent. i was happy with it. 🙂

1 friend ordered the leek & potato soup which came with 2 deep-fried oysters & was good as expected.

1 friend ordered the foie gras ravioli (the pink sauce didn’t look great or very appetizing to me like the beautiful pumpkin ravioli at al borgo did, but i think it tasted fine). the other ordered the baked camembert with sour dough. it looked ok but my friend said it was not as good as the other bistro du vin outlet at great world city.

for the main course, i ordered the beef ribs stewed in beer. again it was competent & the mash too, though in comparison my own spanish beef ribs was better because i had a very sweet & tasty vegetable ratatouille to match/balance the fork tender beef ribs whereas this one was very beefy & robust.

1 friend had the duck confit. he thought the black sheep cafe’s was better. 1 had the seafood bouillabaise with fish, clams, mussels, prawns. she said the fish was not great. anyway, bouillabaise & duck confit not my favourite. the smartest among us ordered the 200g 200-day australian grain-fed char-grilled ribeye – a S$10 supplement with no discount.it was ok really for the quality meat. i could smell the steak when it was served, & i had a small piece & it was excellent. 🙂 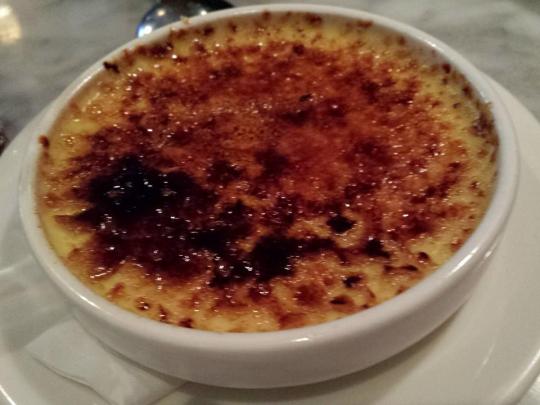 for dessert, i & another friend had the caramelised apple & raisin crumble with roasted apple ice cream. it was good, though it would please the eye better served on a dessert plate or long dessert dish. 1 friend had creme brulee which was recommended by the waiter & which she obviously enjoyed. the other had chocolate madaleine. the madaleine texture looked dense. i was about to say the ones at esso station looked better but my friend beat me to it. so this dessert was not good. 🙂 i had cuppaccino & my other friends had coffee.

overall, at normal S$30pax for 3-course set lunch including coffee, the food was competent enough & i didn’t consider it expensive. with maybank 1 for 1 discounts, the lunch was S$15pax (excluding the supplement) with 2 free wine for 4pax, well you could not get that at a hawker centre or coffee shop. so it was very cheap & great value.

c/w au jardin which served a S$45pax 3-course set lunch include coffee (there was also a S$65pax menu), which was also having the maybank 1 for 1 promotion including wine, i would return to au jardin (which i was to happy to pay full price at other time) rather than bistro du vin. the latter was competent & average whereas au jardin was fine dining in both food & presentation (& of course quite different ambience). eg my lamb saddle was exquisite, even better than many good lamb racks i had before.

on the service, bistro du vin was ok. the young male server was quite knowledgeable & responsive & answered my several questions on menu items & selection. 1 of my dining companion had poor opinion of the service though because he did not offer the wine to us automatically but only when asked & he replied that most people did not take wine during lunch. the attitude i think was ok, but maybe the training on managing customers was lacking here. but overall, the service again was competent & in my opinion rather better than many similar places.

au jardin’s service was of course much better. the staff were much better trained & professional, but then it was a different class restaurant so not apt comparison. 1 younger au jardin male staff though appeared to be not so great in his service attitude.