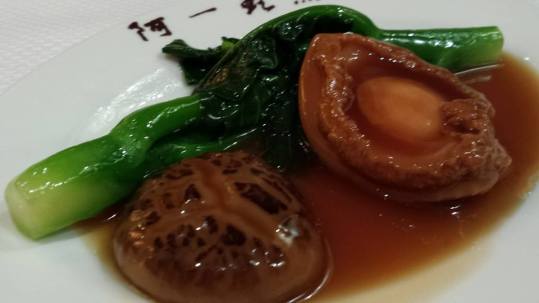 wife was having her own homecookd get-together with her friends & i made a seafood risotto & tiramisu for her.

#1 the soup was good. the lobster claw was quite tasteless, but the soup stock was good & tasty.  i felt that the cooking here at ah yat abalone was generally better than the other ah yat outlets.

was not expecting much with the #3 fish fillet japanese style but it was good. fish was firm & bouncy & batter was  good. the sauce was just right & not overpowering.

& i finished the entire #4 braised yee meen noodles despite my usual low carb preference, meaning it was good. very tasty for a plain vegetarian dish! excellent! 🙂

desssrt was a #5 bird’s nest in almond cream. it was competent but bird’s nest does not register much with me, non-descript. almond cream was smooth. maybe i would be able to taste the smoothness better w/o the bird’s nest.

for this dinner, i bought 3xS$28.80pax groupon vouchers. there was a S2.50pax cover charge for tea & towels & a S$3 charge for peanuts (both compulsory charges whether you took or not), which came up to S$12.95. so in total we paid S$33nett pax for the 5-course dinner. quite a good deal.