had a pleasant & relaxing dinner chat with a close friend at fleur de sel on 7.5.2014. he was going to do some hiking at cinque terre & could not find his walking stick so i brought mine along for him. 🙂

i heard about fleur de sel from my wife’s good friend (who bought us an excellent dinner recently at the very artisan singapore fusion restaurant started by a 29 year old investment banker, labyrinth on 30.4.2014). seemed that the whole lobster, completely shelled at S$49++ was very good here. 🙂

my wife came by 2 nights ago with the same friend and took the S$88pax 4-course set menu. she felt that the escargot was not good, and it was not the cooking but the quality of the escargot itself – not sweet, tasty. 😦 she also felt the soup was average, the cod was ok good & the rhubarb dessert was good.

i was decided on the lobster for myself. when my good friend arrived, i gave him my wife’s feedback & suggested he took the other S$108 set instead, as the dinner was a belated celebration of his recently past birthday. anyhow he decided to join me to order a lobster each. looking at the menu i was not attracted by the appetisers, so i suggested we ordered a cod (main) & a lapin (rabbit) risotto main to share before starting the lobster. my friend though wanted only the cod. i got him to order a wine so he got himself a cloudy bay (white).

we were served semi sour dough with butter, and advised we could dab the sel (salt) too. the restaurant name fleur de sel means flower of salt, apparently hand harvested (haha..what a description!) by workers who scrape only the top layer of salt before it sinks to the bottom of large salt pans. 🙂

one salt was flavoured with rosemary, the other with citron & something else. good fun…lol. 🙂 we tried the salt but our palate not sophi enough & they felt non-descript. the butter was ok average so we asked for some olive oil, which was very good, very fragrant extra virgin olive oil. 🙂 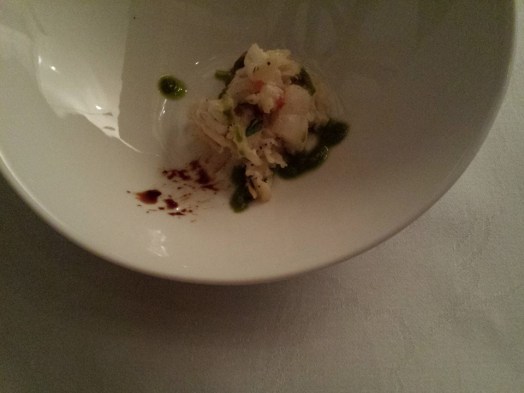 the amuse bouche was some crab meat, pretty good. 🙂 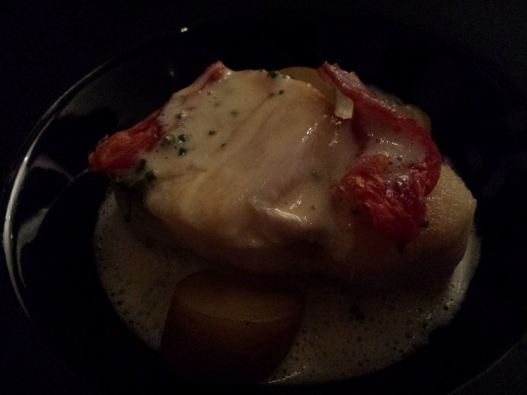 the pan seared atlantic cod was pretty good, though the cod was firm but did not feel so smooth & bouncy, somewhat different from the texture of cod i was accustomed with. it was served with some sauce so more a wetter version (not knowing how to describe!).

my own Nobu miso cod

my own teriyaki cod

i  guessed it was a very good cod regards this method of preparation but for me personally, the satisfaction was not at the level i had with my own nobu miso cod & teriyaki cod (whereas by comparison the teriyaki cod at mikuni & at keyaki would of course be better than mine).

the shelled whole lobster in lobster bisque was very good (the dark photos above & top taken with my samsung s4 did not do justice to the dish). meat was fresh, sweet, tender & very tasty with the bisque. excellent dish this! 🙂 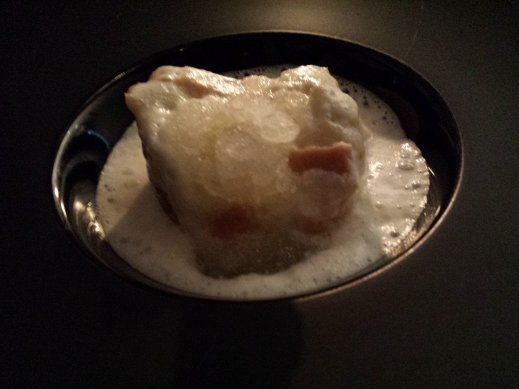 service was very good. server knew we were celebrating my friend’s birthday so brought a small cake with 1 lit candle. 🙂 it might have been expected of a good restaurant. still it was much appreciated as an important guesture that defined good service & training for a good restaurant. 🙂

the bill was S$198 for 2pax including 1 glass cloudy bay white & dessert.

overall, with the exception of the lobster, i would consider the food just average for this level of dining & prices. of course it would be much better than a usual eat. 🙂 on the lobster while it was really good & competitively priced, many restaurants, both chinese & western, are able to & indeed does the same, equally good & inexpensively priced.

if I made a comparison with labyrinth, the latter was a lot more artisan, creative, able to reproduce the flavours from ingredients that were beautifully assembled, tasted similar but looked entirely different from the usual singaporean dishes like chilli crab etc. however, some may consider paying (say) S$90nett for whole lobster etc better deal than paying for same for labyrinth’s set, creative or not! it is a very subjective thing.

won’t be back soon, but probably will have another go a bit more time later.