I was early for 2pm check in at Sunroute Plaza Shinjuku. My Scoot flight TZ202 touched down on time at Narita 11am. I travel only with handcarry (nothing to shop or cart back) for the longest time, and so got on the NEX (Narita Express) by 11.30am and arrived Shinjuku 12.40pm and at Sunroute soon after.

So I decided I might as well have a bite. As I was getting out of Shinjuku South Exit, I noticed that there was a Asahi Sushi outlet at Mylord Building there. So I took the short walk (300m) & got on the lift to 8th floor.

As I was meeting my daughter & her friend later for dinner (they were already travelling in Japan), I decided to just take sashimi.

There was an impressive looking Tokusen sashimi moriwase which meant specially selected mixed sashimi (see photo above) at 1800yen, so I decided to just have that.

This was what I had-

The aji was very good & went very well withe the dash of ginger. We get very good aji in Singapore as well. The hamachi were quite ok but I had much better plump ones before. The tai was average but at least not those with much residue, The amaebi was good. 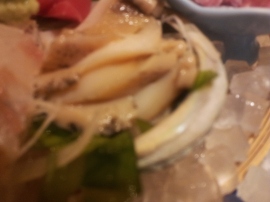 The awabi was fabulous (though the photo was not as I was unable to focus well). I had Japanese abalone sashimi before but usually they were a bit tough & chewy. & they were expensive and not great so I wouldn’t usually order them. These were not tough at all & very sweet, a really nice treat!

The negitoro was also very sweet (I later tried a pair of negitoro sushi at a conveyor belt sushi place & though they looked beautiful they had very little taste).

the slug thingy (tsubugai) was ok but still a bit tough, never my favourite but quite ok here. and the akamai – lean toro – was also good. 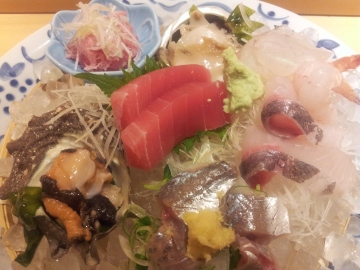 So as we all already know, good Japanese food is a lot more expensive in Singapore on a quality-price comparison. There were many other good sets at Asahi Sushi like a good chirashi don for 1490yen – and it looked as good & more in quantity c/w the one at Ginza Kuroson, which to me offers the best priced quality chirashi don in Singapore at S$20++ for lunch inclusive of salad, dessert & ice tea.