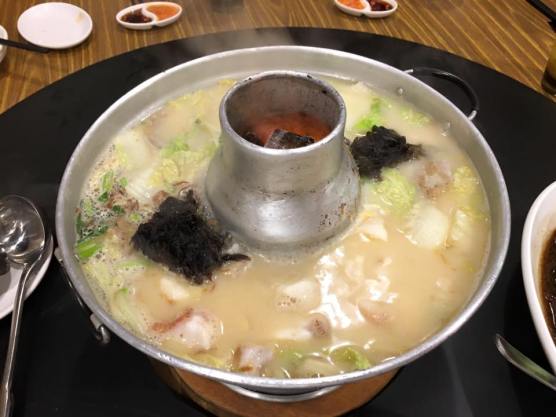 it’s a place i wanted to try but never did. it seems it was the same with the organiser as he was overseas when a group of friends went & sent him nice photos. i told him 1 of the pluses of G20 was we get try places we somehow didn’t get to go ourselves.

3 of us decided to go early for a cuppa at the wheeler’s yard. i took flat white. strong coffee with very smooth frothed milk. i liked it.

i went early at 5.45pm & managed to get free parking on the road on jalan ampas next to the tai pei old people’s home. 🙂 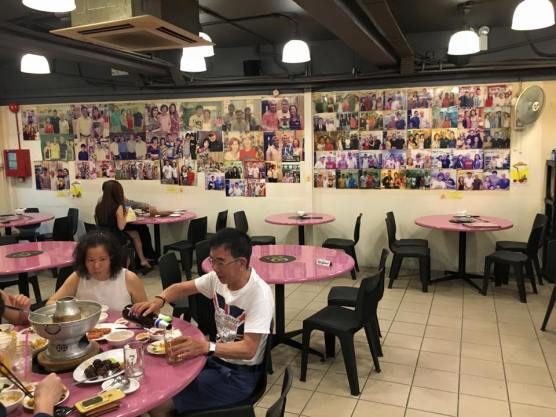 after our cuppa, we drove over to whampoa keng fishhead steamboat. i parked at ah hood gardens (HDB) along ah hood road (lots of parking) & got to the restaurant before 7pm.

restaurant was plastered with photos of the owner, his wives & staff & the more famous patrons. 🙂 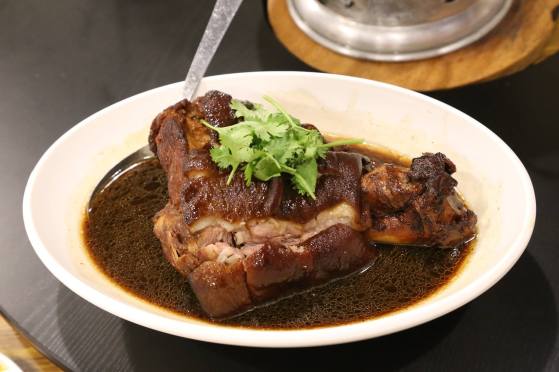 our friend the organiser ordered a S$288set for 10, and changed some dishes.

excellent call! this pig trotters lagi shiok! the best of texture not overly soft & mushy & tender meat falling of the bones. my friend liked the star anise flavours. for me that was just slightly over. 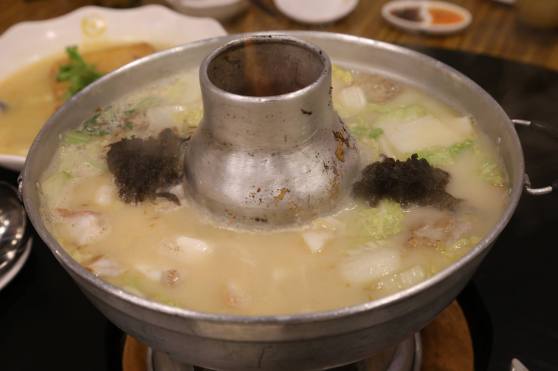 the best undeniably was the fish head steamboat. my friend ordered the red garoupa.

the murky soup was such intense goodness. 🙂

& the refills were also not just water or light tasting soup, but almost the same intense stock. i guess the same stock minus the additional taste from the steamboat content.

not sure if it was just the head or a whole fish but it came with lots of meat too. 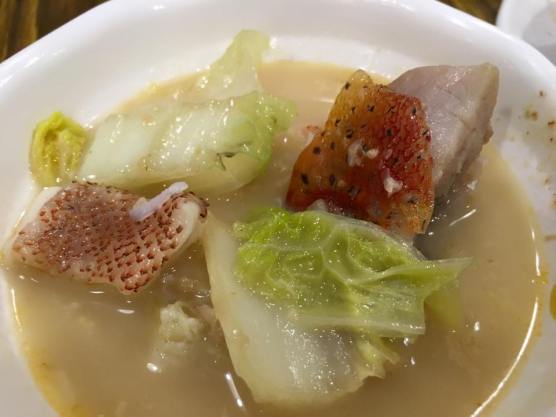 i think i must go round trying out fishhead steamboat liao! 🙂 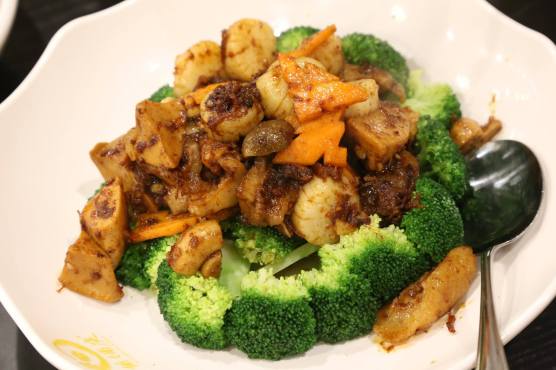 the stir-fried brocoli with scallops in XO sauce was a pretty nice dish. there was a good serving of scallops. 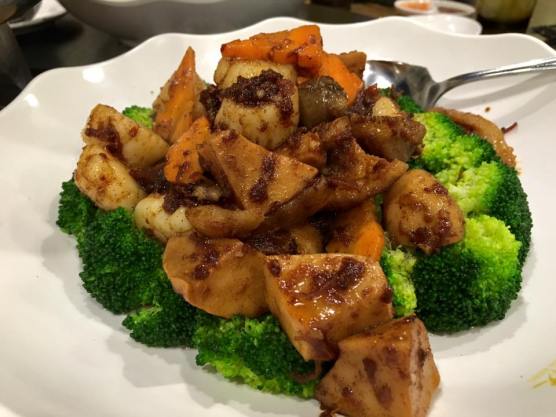 & there was also something that tasted like the cheaper canned shellfish. a friend thought it was gluten but i felt that the texture was shellfish. not sure.

my friend changed the prawns in the set to their signature salted egg prawns.

it was a good competent dish, looked nice & tasted good too.

i guess it was nothing special just a standard dish in any zi char or restaurant. 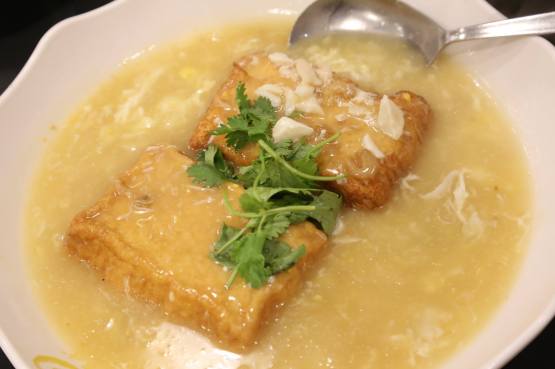 we had a tofu dish. it was apparently a seafood sauce & the tofu was made by blending egg with silken tofu, or so according to other reviewers. 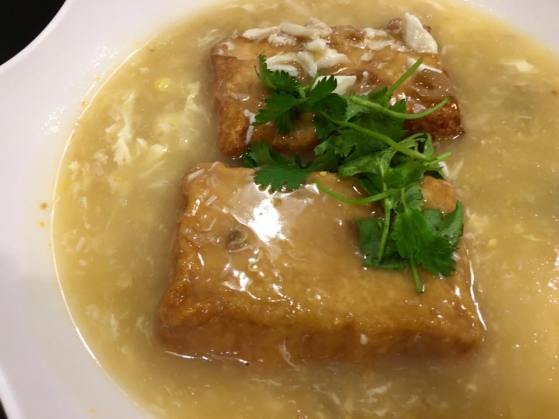 didn’t leave an impression with me.

i think the tofu dish at kok sen & also at muliangzai liang kee were a lot tastier.

the pork ribs with deep-fried cod strips was another signature dish.

it was competent but like any 排骨王, it’s a passable dish not my favourite. 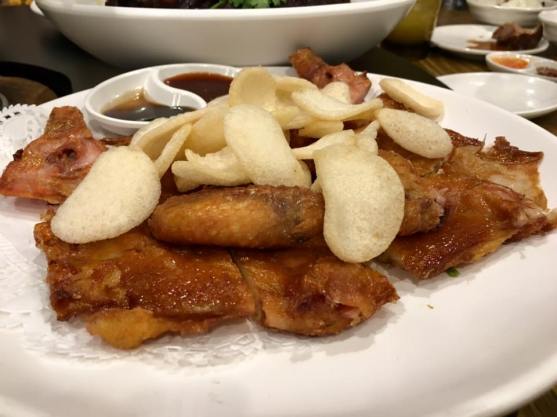 the crispy boneless chicken 金龙鸡 was another signature dish.

a friend thought it was too processed. i totally agree! i think i like the “not favourite” pork ribs better than this.

crispy skin was there, but the sweet, moist, flavourful taste of a roast chicken was gone!

alas! i like my roast chicken at 6th avenue coffeeshop better leh!

we had too many dishes liao so did not get to try their 2 other signature dishes – the prawn paste chicken & the hae chor (teochew ngoh hiang). apparently those were quite good. 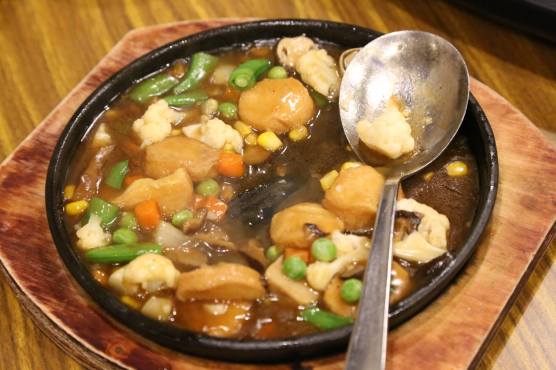 the no. 11 friend is a lacto vegetarian (dairy no egg). he could only joined after 8.30pm. 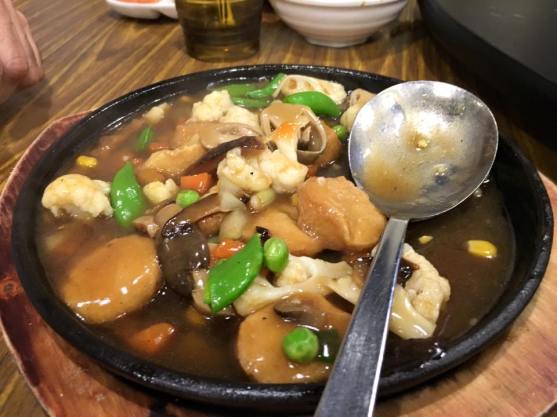 my friend ordered a tofu dish (we didn’t know it was egg tofu).

plus a shanghai green.

anyway he did not take much & we ended up finishing off the egg tofu & the greens.

the dinner was S$33pax, a little more expensive than the usual zi char stalls like-

but quite fair price for the food (i would say better food, maybe except for kok sen), especially the alluring fishhead steamboat!^^