my last post on two chefs was 2 years ago, no change in opinion..haha!

we ordered a see hum (cockles). 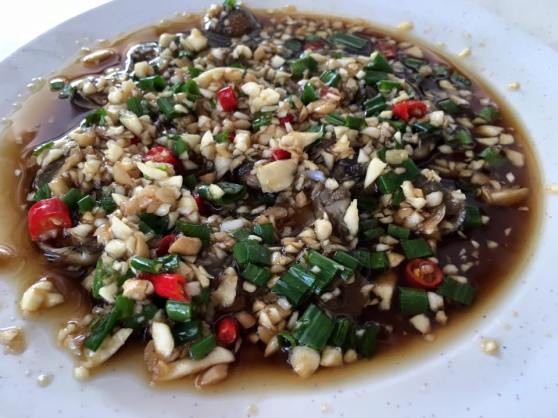 cockles were tiny! & the serving very small for S$7. inflation la..usd going up? whatever…

but really no comparison with 香港街珍记 – Hong Kong Street Chun Kee, just 1 level up at the market next door

the sauce at chun kee has a nice tangy lime taste, & it’s like 2x the size.

lunch came to S$27.50. not ex but then servings really tiny. so for me only the san lo hor fun consider good (but then it was not always consistent!). the song fish head & cockles were just ok only…

& lastly, the old lady server had a poor service attitude. haughty, unfriendly, told us curtly there was no sliced fish beehoon soup here, the S$5.50 hor fun was very small, & looked very fed-up when we didn’t order a larger portion.

& interestingly, the young fella who took the bill was quite courteous, maybe he’s the boss..

i think no chance i will come here again for the song fish head la when hk street chun kee is one step away.

Closed on Every Last Mon of the Month

daughter wanted to buy dinner for family + close family friends at ban leong wah hoe to celebrate an occasion. we went there for a 7pax dinner on 18.10.2015. ^^

i noticed also the absence of pricing in the menu. i think that is quite an unacceptable practice today in zi char, restaurant or hawker centre, haha! so that’s why so many comments about non transparency. 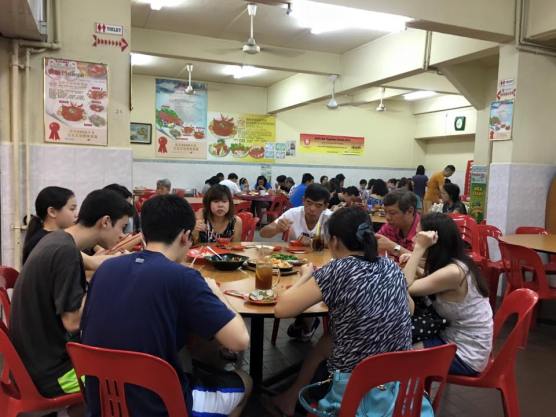 we found the service ok actually, no nasty lady boss. service was ok & kind of expected for a zi char place.

but the place was quite crowded, so people were coming. youngest daughter managed to find street parking on the next street from casuarina road.

food though was quite poor. quite below the standards of the usual zi char places like – 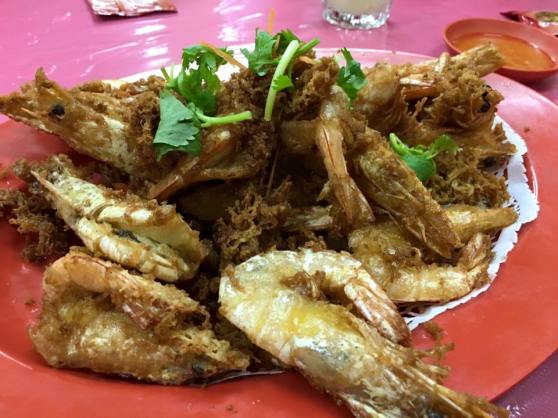 butter prawns was poor. quite dry. maybe should have ordered cereal prawns instead. the breadcrumbs were the tasty bits so that said much about the prawns.

ok i guess. the sauce was quite tasty like any chilli crab, not spicy at all (i prefer spicy!) 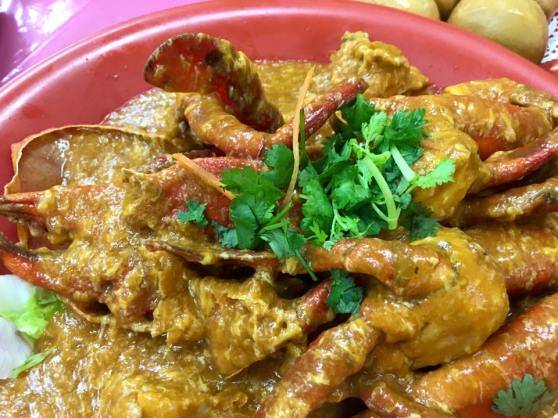 crabs were good though, firm & meaty! ^^

this crab made me appreciate my friend alan’s homecooked crabs even more. his chilli crab sauce had more intense & lingering crustaceans flavours whereas this sauce was mostly sauce just some crab taste.

alan’s crabs themselves though were not as good, not so “solid”. it could be that the sauce flavours were more intense because he used a lot of crabs (6 crabs!). 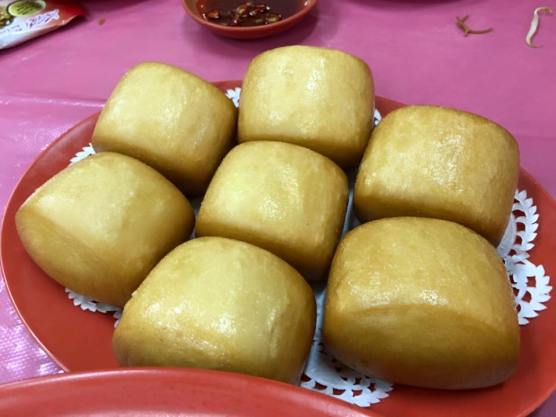 but the breading was not great, hard & crusty. actually our friend (my daughter’s guests for the evening) does a much better fried chicken, and so does my helper. 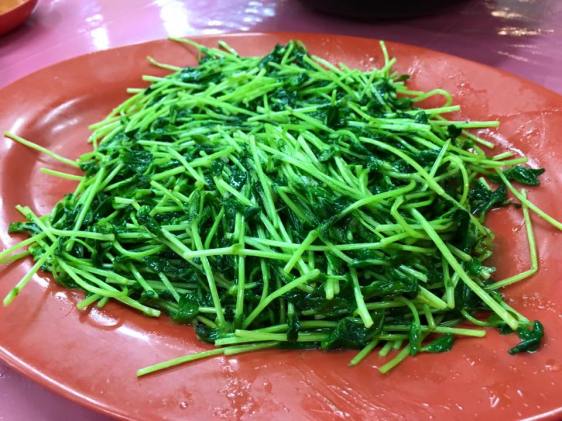 dou miao was mediocre, i think quite poor. i can do a better fried dish with more wok hae anytime.

the tofu dish was almost not edible, hopeless dish! chunky roasted pork (& a quite bad roast pork to boot!). not sure how to comment on this.

basically quite poor for zi char.

mee sua with quails eggs was supposed to be a singature dish??

it was ok, edible, but i won’t even say competent.

i guess sometimes it depends on whether we order the correct dishes. still, based on this quite poor experience, this is a place where i have no interest to try again.

was in upper serangoon area & my wife decided to go to ming kee live seafood at macpherson for dinner on sunday 23.3.2014. 🙂 it was few shops from swa gardens when we had nice teochew food for our g10 dinner recently.

i don’t take crab often as i find it expensive. but this time we were in the mood for crab. we ordered their signature crab beehoon. its S$54/kg so S$75.60 for a 1.4kg sri lankan crab. usually when eating with friends or children, don’t really get to eat much so this time just 2 of us, it was like feasting on crab. 🙂

i could not resist ordering the S$5 cockles. it was simple dish served with fish sauce & cut chilli. not the raw cockles (血蛤) i had at two chefs, small & not as fleshy..still, enjoyed nonetheless! 🙂 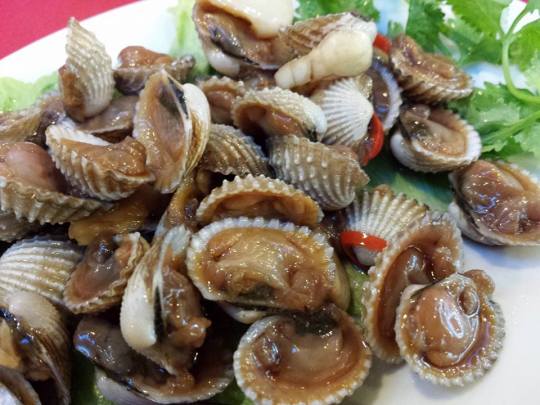 the beehoon was tasty with sweet crab flavour. the sri lankan crab was meaty & fresh & sweet. i don’t take crab often enough to judge but didn’t find it any special though. it was not bad i think the house of steam fish, golden spoon etc were better than this.

we had the coconut jelly dessert. it was just S$8 & the jelly looked like using the coconut juice & adding agar agar. it was good, mildly sweet which was just right & refreshing.

dinner was S$101 in total for 2pax. we had only crab, cockles & coconut jelly. there was GST but no service charge but S$3pax charge already for towels etc (no appetisers).

ok & very enjoyable for this evening because we were in the mood to have crab, but otherwise not a place i would usually go.

the zi char stall at a commonwealth crescent had good reviews, but honestly i was quite disappointed. while it was better than woh hup at hong lim (which was bad!), it was far, far from the very nice dishes we had at kok sen. in my opinion,it was not even comparable to the forture restaurant at the old holland road coffeeship.

we did not order their signature butter pork rib using milk powder as a few reviews & also a friend who dined there recently said it was too sweet. the only dish i really liked was the S$6 blood cockles – pickled raw cockles (腌血蚶) with lots of garlic. 🙂 but then i was about the only one eating them as my friends were not into this much & one felt that garlic was too much (though i liked). so it was not representative!

to me, the worst dish was the claypot fish head, gluey & not having the sweet, fresh, tender taste of fish, though the photo may look ok. its a dish i had not taken for perhaps >10years or longer. though i think most are now served cut up & deep-fried, i still prefer the one i had 30 years ago at whampoa where they served the head whole & not deep-fried. two chefs did have assam fish head & blackbean sauce song fish head. surely those would be ok – it’s like anyone can do a song fish head, i remember 1 news report said 1 hawker centre had 15 stalls selling it! 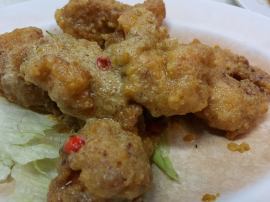 the salted egg prawns were ok, tasty but oily, and really not my preferred preparation for prawns.

the golden mushrooms tofu was ok i guess, but quite poor in comparison with kok sen & muliangzai liang kee which were minced pork deep-fried tofu.

overall, it was a very average meal can get at any coffeeshop (like 6th avenue coffeeshop). i guess correspondingly the price is cheap S$60nett for 4pax, but then kok sen was cheap too & very much better!

maybe still have to try the muliangzai type of zi char stalls.