wife wanted porridge & i was thinking of the nice porridge in hong kong, like at keung kee chicken porridge 强记鸡粥. 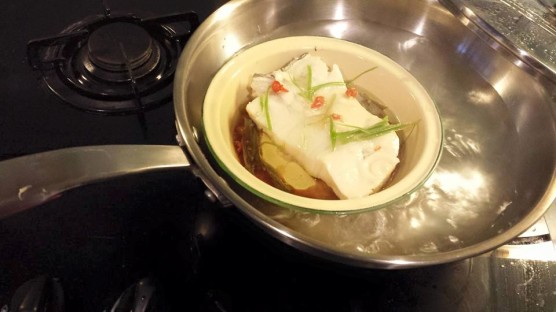 i had a leftover piece of cod so decided to steam it. that went very well with the porridge. i did that for my recent 6-course anniversary dinner as well.^^

add oil, 2 pieces dried scallops, and a chicken drumstick quarter with skin removed (i used breast meat as i did not have the drumstick which is better with the bone), and boiled for 1.5 to 2 hrs until rice is broken up into consistent smooth texture. add water where required.

i also made some minced chicken balls (did not have minced pork), marinated with fish sauce & pepper. 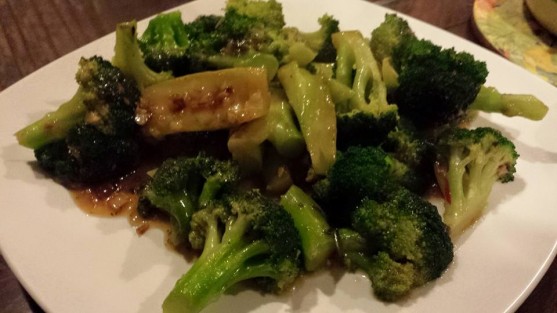 it was a very enjoyable dinner for 3pax, simple & easy to prepare.

it proved to be as great as the wonderful breakfast the day before. 🙂

i looked at the dishes for both days and surmised that both basically had rice & good pickles and 4 side dishes. 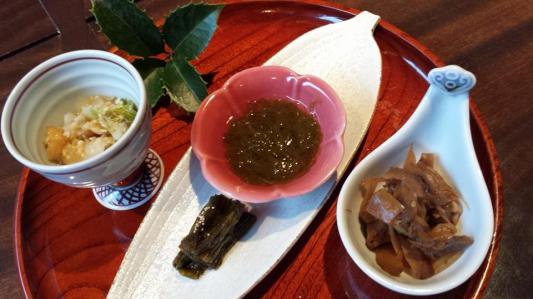 the pickles included a tasty seaweed dish in the middle (i drank up the sauce) + konbu, some veg pickles on the right & another on the left.

one more with radish, veg & seaweed. 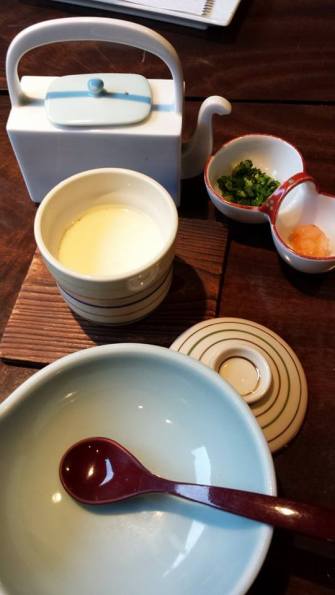 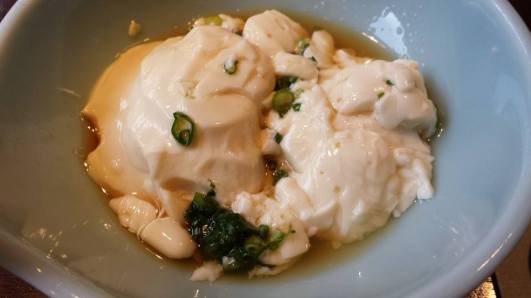 1st side dish was a steamed tofu dish. you scooped it out onto a bowl, and added some sauce from the curve beak pot. it was tasty & had excellent texture. i added just enough sauce so i could finished off everything including the sauce. 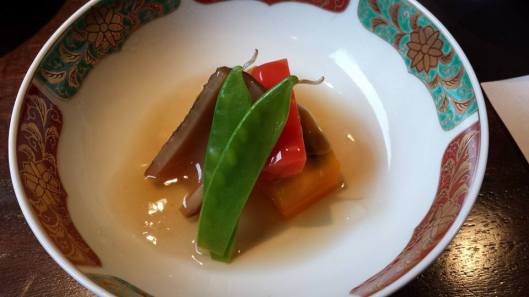 the second side was a simmered veg with sweet peas, pumpkin etc was very good. this is a common dish for japanese breakfast & course dinners.

the 3rd side was a braised wagyu with sticky mountain yam topped with a dash of grated wasabi & a shiso leaf. this was excellent though the braised wagyu side dish for the dinner kaiseki on 26.1.2015 was even better.^^

the 4th side was a grilled fish, not saba this time but nice too.

there was some special rice with toasted sesame and dried scallops. i added the pickles. very nice.

the server told us we could cracked an egg & add it over the rice. i did that. i liked it as i liked the silky texture of egg yolk.

the rice was quite fine on its own. & it was nice too with the egg. i liked it both ways. 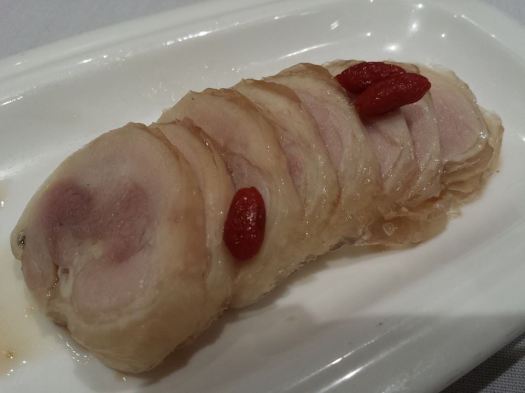 #1 the drunken chicken was 1/2 frozen & did not look great (my one looked better..haha) but the taste was good! much better than mine. 🙂 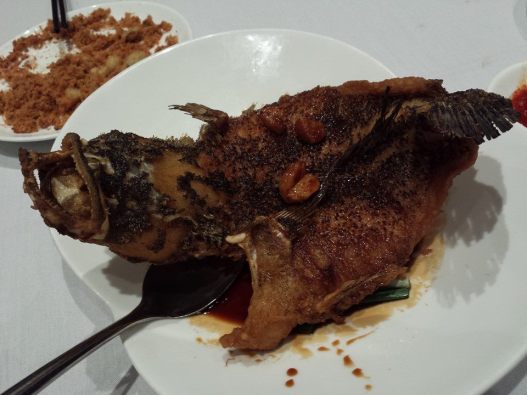 #3 deep-fried soon hock was ok, above average, perhaps a little better than the recent one at ban heng on 25.4.2014, but not the best.

#4 the pork ribs were flavourful. meat not the most tender, just slightly chewy, taste was good.

#5 crab sauce & tofu were good. look-wise seems something missing in this dish..maybe some garnish or greens.

#6 pating my favourite fish. this method of preparation not the best. the minced ginger or HK steamed style much better.

#7 it seemed really odd that a roast pork dish in such a restaurant could be bad, but it was, much below par!

#8 we were already very full when i spotted the char siew later & had to order it. this was very good! almost imperial treasure standard. 🙂 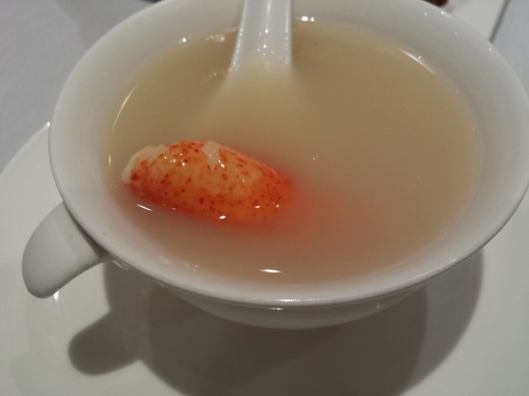 #9 each diner was only allowed 1 order of soup. i had the lobster claw sharksfin soup. it was very average soup (not even as good as any lie tong aka soup of the day from tonglok restaurants or imperial treasure), and the sea cucumber sharksfin seemed no better.

#10 venison was very average, like any zi char stall. 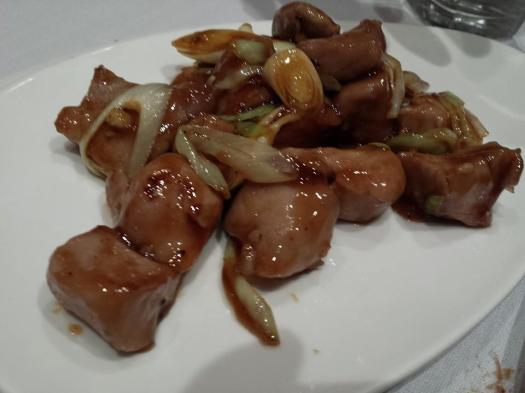 #11 kurobuta itself was tender & tasty. this chinese way of preparation though not my favourite. 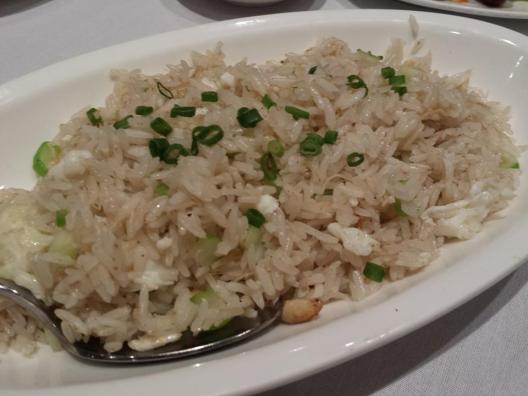 #13 these were very nice, much better than wasabi mayo prawns preparation. 🙂 may try these at home. 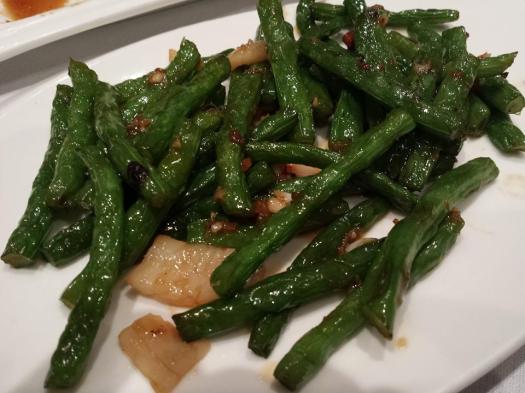 #14 this was like a joke. the scallops turned out to be like 1 medium scallop (or maybe 1/2) sliced into 10 pieces. you need real skills to slice it so thinly. a case of disappearing scallop dish. 😦 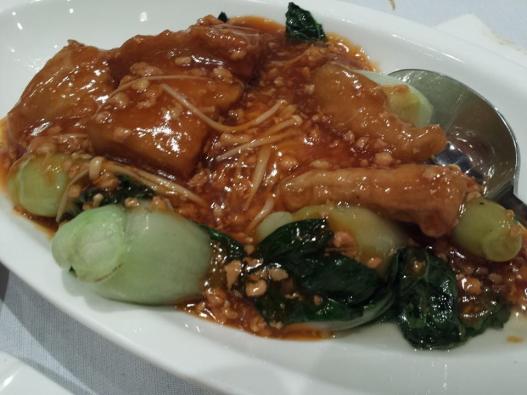 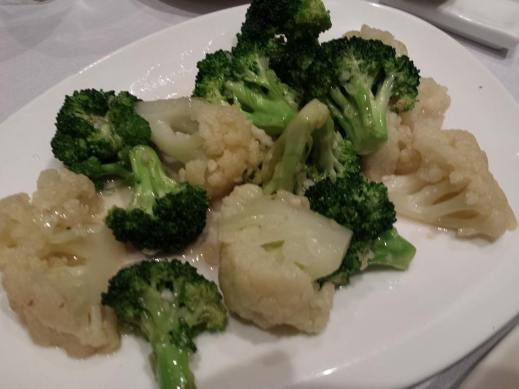 overall food was quite good for an ala carte buffet, a lot better certainly c/w ban heng.

the service was good, efficient & friendly throughout except when paying the bill. we were charged a really hefty S$1.50pax for ice water & S$1pax for towels, so there was an extra S$10++ tab on the bill. it was a bit high but ok except that we asked specifically at the beginning when deciding whether to order tea & was told by the server that water was FREE, and tea was S$2.50pax. i told the girl closing the bill. she said water was as charged (next time i need to record the conversation. haha!). anyway, the total bill after 1pax free came to $120nett=S$30nett per pax so i was quite ok to just pay it.

i would come back again but buffets were very heavy & not ideal for me to do too often. 🙂

my daughter’s friend’s father is a chef. he made a shorthand version of buddha jump over the wall using simple ingredients & my daughter brought home last week. it was very good & my wife & i enjoyed very much. 🙂

my wife is leaving for UK tomorrow & my daughter’s friend came for dinner, so i thought i would try recreating the dish. 🙂

the ingredients that were used were dried scallops, pig trotters, chicken, mushroom & small abalones. so i went to sheng shiong last evening & bought 1 chicken, a whole pig trotter. i did not want to waste good abalones (not sure how the soup would turn up) & there was not enough time for me to prepare dried abalones i had at home (takes couple days to slow braise in brown sauce) so i bought a can of cheap limpets for S$9.30. 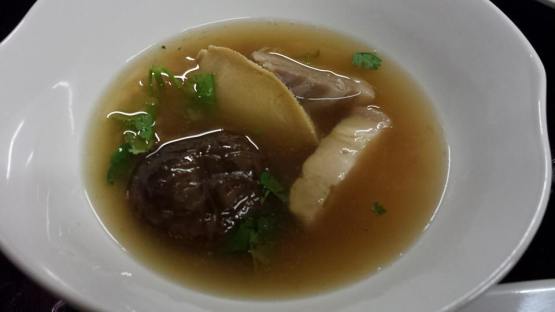 i added boiling water to some dried mushrooms & 2 dried scallops & soaked for several hours to soften. i used about 2/3 of the pig trotters & added the remaining boiling water to remove the scums, after which i cleaned thoroughly in slow running cold water.

i cleaned & used 1/2 chicken & quartered it. then i placed the 2 chicken quarters & pig trotters (4 large pieces) in a crockpot & added the dried scallops, mushrooms & also the water they were soaked in , throwing away the residue. i open the can of limpets & tried a piece. the brined solution tasted quite good so i emptied the whole can into the crockpot, and added 1 teaspoon of salt. i added some water to about 80% full.

i then turned on the crockpot to low & left overnight till next morning (about 7hrs). next morning i removed the pig trotters (& chicken) & limpets so they were not over-boiled. this was very important for the pig trotters to keep the tasty & still bouncy slightly gelatinous texture. no difference for the chicken though, 7hrs even at low was too long.

i kept the crockpot at high for another 4hrs to get the most flavour from the dried scallops & to reduce the soup a little for more intense flavours. then i let it cooled down & placed in the fridge.

when it was time to serve, i took out the soup & removed the layer of oil. i then boiled the soup & added back the pig trotters & chicken & limpets & then served. 🙂

organiser of RI friends’ dinner this month wanted to do it at a taiwanese porridge place & chose shin yeh，a tunglok restaurant. this dinner get-together was the most successful by far – we had initially 22pax, 2 could not attend last minute, still we had 20pax on 2 tables on 22.1.2014.

i had the amex palate discounts – 20% for 5-20pax. the restaurant called & i spoke with the manager who initially said we could not get discounts as we were 22pax. i gently told her it didn’t make sense – the worse case would be that we had our 20% discount for 20pax & no discounts for 2pax – & perhaps we should take our business elsewhere. the manager was sensible enough to say she would split the bill for us but that this was an exception. whatever! its a competitive world out there & business was not that great that evening. in any case as we finally settled as 20pax, no rules were broken!

i went earlier with the organiser to order ala carte from the menu (there was no discount for set menus & as always when festivity is near – CNY – set menus were very ex & often offer poor value).

we usually avoid appetiser & tea as they added heftily to the bill. in this case though tea was S$12 for the table (seemed like same S$12 for another number of diners on a table) so it was just S$1.20pax & very reasonable. we could have done without the S$5 appetisers which were just bah kua but anyway we reduced to 2 a table so just S$10 for 10pax. ok lah… 🙂 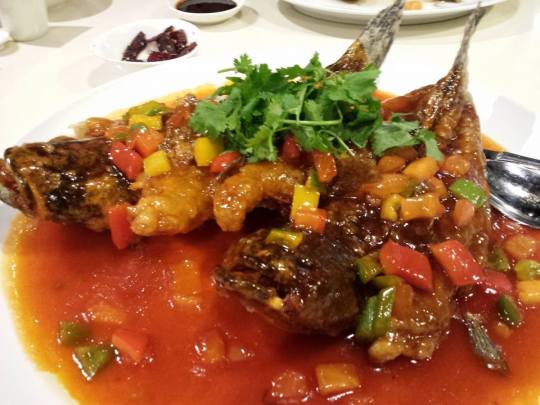 #2 we decided to take the staff’s recommendation & ordered 2 sweet & sour soon hock for each table. it was cheap compared with live fish, and the preparation made it quite tasty dish.

$3 another staff recommendation was the prawn with pineapple. this was good too. the prawn preparation was like a wasabi or salted egg prawn, lightly deep-fried. the pineapple added zest to the dish. 🙂 the staff suggested that this dish was more unique than taking live prawns. 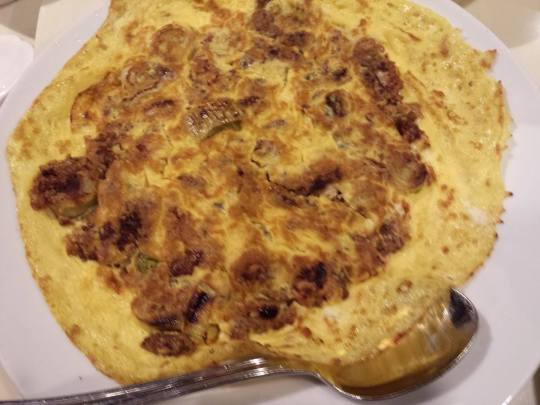 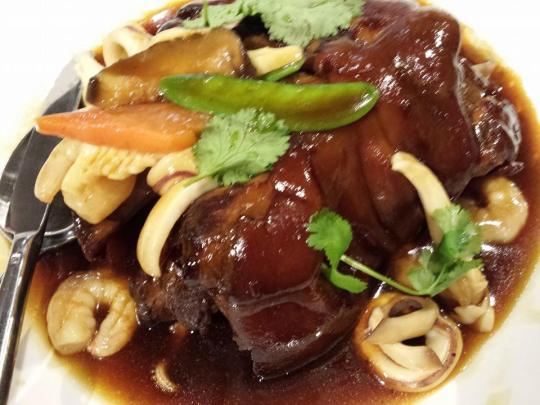 #4 the 三杯中卷 (squid) was good too. 三杯 (3-cup) is a common preparation in taiwan & hakka dishes = 1 cup soy sauce, 1 cup cooking wine, 1 cup sesame oil. & since we already had a cold chicken dish & another whole roast chicken, we picked squid instead.

#5 the whole roast chicken with five-spice salt dip was tasty enough with crispy skin. it was kind of small though.

#7 the 元蹄 pork trotter with prawns & squid was good – great taste & texture, uncommon to have prawns & squid in the preparation but an welcome addition. 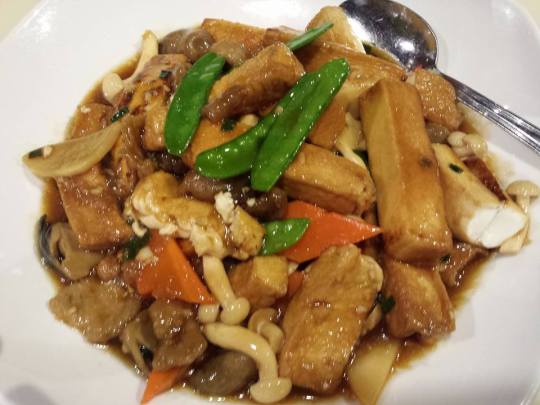 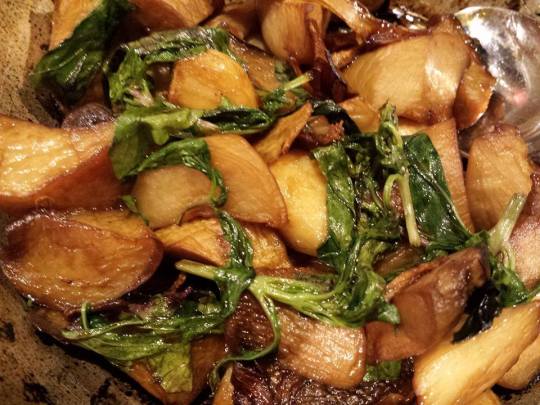 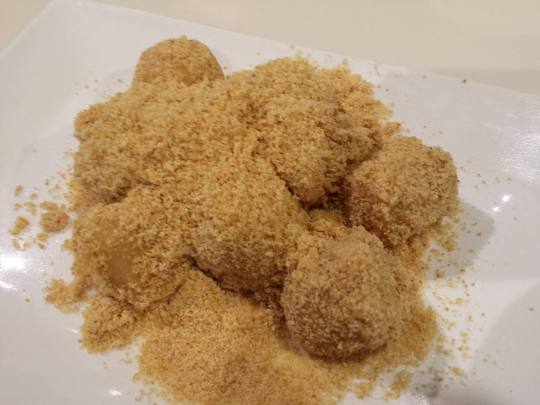 #8 the braised tofu with minced pork was good.

#9 the mushroom dish was quite unique though the price was to me unattractive, S$24 for medium portion c/w S$32 for the roast chicken.

the restaurant provided a free mua chee (mochi) dessert. we were quite full already so did not add any dessert orders.

food was competent, quite good really. the bill after 20% discounts came to S$594nett for 20pax or S$30pax, so it was really great value. the service staff were great – responsive, polite & helpful. shin yeh though can be quite expensive (e.g. the soup of the day was S$10pax so it really depends on the food & portions you order). we were able to order fish, prawns, chicken & pork trotters that were substantial & not costly, so we had a great meal, enjoyable evening get-together at very reasonable cost. 🙂