my dining quartet had this sudden spell of interest in hotel buffet. for this round, our hostess selected The Edge @ Pan Pacific Singapore, which had last year undergone a major renovation. lunch was S$58pax and there was an ongoing 3paying 1 free promotion for various credit cards, so the price worked out to S$43.5++pax. 🙂

i (& i think in fact all my dining quartet friends) had no fondness for buffet – yet there we were! I always thought buffet main courses “sucks” (pardon the language) & if I went to buffet I would just take very selected items from the appetizers or antipasti & the cheeseboard if they had.

The only buffet I thought worth going was the semi-buffet lunch at Equinox which served a selection of good fine dining main courses & great appetizer buffet/cheeseboard at S$59pax (so S$29,50pax for 50% Feed at Raffles discount for 2pax). Lately I have added One-Ninety @ Four Seasons, which I now think serves a higher quality semi-buffet than Equinox and at S$38pax w/o main course suits me fine (S$48pax with main course). 🙂 The other very good buffet is Basilico at Regent Hotel. I went during RestaurantWeek in 2012 & the antipasti was excellent. I think I should go back there to try again soon, talking about not having too many buffet..haha.. 🙂

I had tried The Line st Shangri-la & Carousel at Royal Plaza at Scotts but sad to say I didn’t think much of them even at 50% discount! I saw The Edge’s menu and didn’t think it was going to be any different.

the sashimi section was very limited for lunch! the kajiki (sword fish) sashimi was good, the salmon was ok, just average same as other buffet & not the best ones. I went back for a second helping of kajiki w/o the salmon. real nice! 🙂 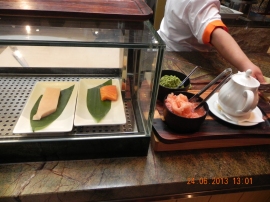 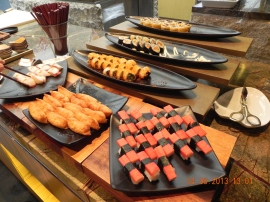 there wasn’t much to pick in the sushi section so I just picked 1 maki (one of my friends liked the inari aburaage sushi though). that’s quite the same in most buffet. In Equinox I would pick a unagi (eel) & a ika (squid) sushi, and in One Ninety I had smoked duck but that’s about it. 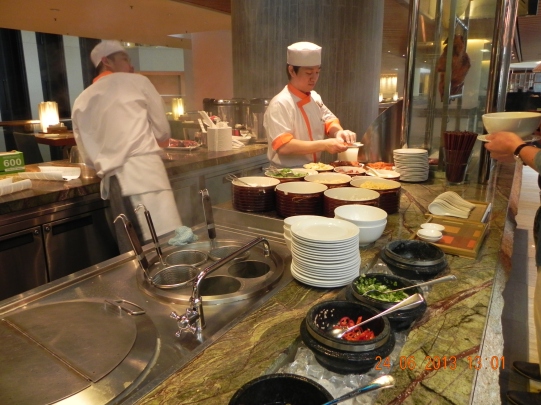 the laksa at the Chinese station was very good – gravy was excellent only regrets no “hum” ie cockles. 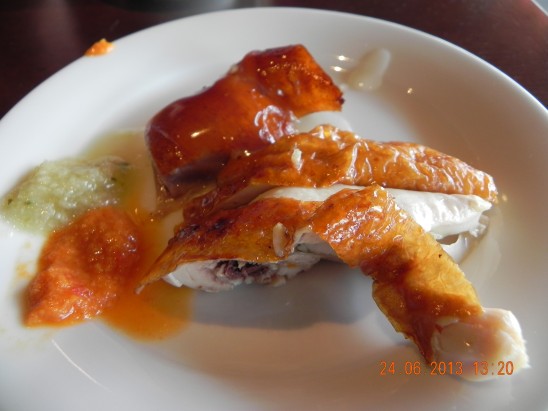 there was salmon and grilled aussie beef tenderloin (medallion) at the western station (above left photo).

I asked the station chef who replied that the beef were medium to medium well. I ordered rare & he grilled on the spot for me.  it was super (top photo) – very sweet, tender, flavourful, well beyond my expectation of buffet main courses, even though tenderloin not my favourite. 🙂

I skipped most of the Italian station – the pasta, pizza & pork rib. My friend who bought lunch thought the rib was good & healthy lean. the other friend thought it was too dry. The 1 item i thought was excellent was the roast pork. I had 3 slices. 🙂

& not forgetting the cold entre station. I took 4 oysters (very sweet) & 2 scallops (good). the station chef told my friend the orange ones were female & tasted better than the all white male ones..lol. 🙂  i skipped the prawns but took the prawn salad – it was kind of  limited selection. 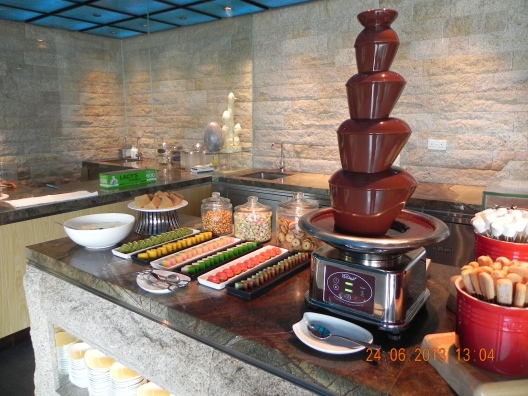 the dessert station was quite ordinary, and included chocolate fountain & nonya cakes.  i took my fav the 9 layer kueh (good) & angkukueh (not good – don’t like the shaved coconuts flakes, that one better for tutu kueh). I also helped myself with some brie at the cheese section & we all took quite a bit of nuts (macadamia, walnut, pistachio, pine nuts, sunflower seeds etc).

the ambience was great. there was good drinks like calamansi juice with sour plum, very good coffee & also tea selection. it was a fun lunch, food & company & trying out a new place (it was first time there for all of us).

At S$43.50pax after 25% discount, would I come back though? regrettably answer is no or very unlikely!