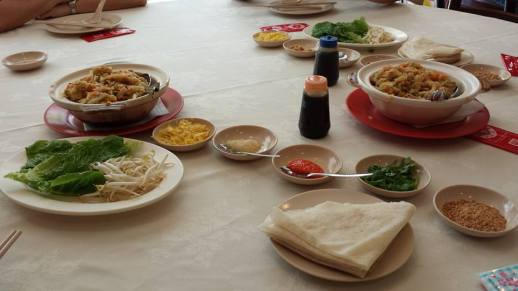 good chance started operations in 1977 and is now managed by its 3rd generation. according to a server they moved to the silat avenue premises about 8 years ago?

the friend who bought lunch said they only accept reservations of 6pax minimum. strange rule? but i not complaining since i got invited as the lucky 5th or 6th person…haha. lol. 🙂 the d-i-y popiah dish was served in multiples of 6 (i.e. 6, 12, 18).

anyhow most reviewers including soshiok mentioned that the fillings were more than enough & one should just add the skin, which was what we did. in the end i took 3 helpings. 🙂 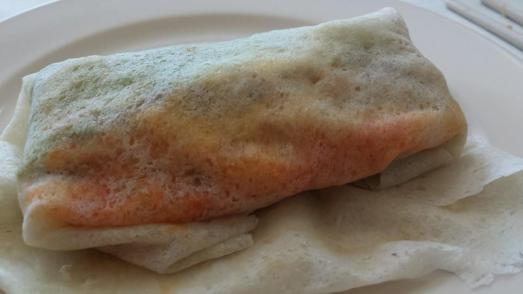 the fillings were the usual ban kwang (turnips) and carrots, the ingredients/condiments included the usual garlic soil, chilli, lettuce, tao gay (bean sprouts), shredded omelette, chopped peanuts, sweet sauce. skin was thin & quite good, the fillings were just average & i thought somewhat not as tasty as usual popiahs i had, which was like very rarely.

several of us were missing the prawns & lap cheong. for me i also missed the hae kor (prawn paste) which we used to have when my wife or her friends had popiah parties when my children were very small. most of my friends though did not have hae kor for their popiahs.

there were some techniques in folding the popiah as some friends tried to educate me. that reminded me in the early years i could actually fold a thinner long popiah & actually cut them into 5 pieces etc as some hawker stalls served them. now though it mattered not as i was eating the whole piece..haha. 🙂

the yam fish head soup was pretty good, though it would not really compare with having a yam fish head steamboat, and a glance at the prices suggested it was not cheaper either.

the kong ba pao was i guess also competent. the braised yam was a good addition to the belly pork. otherwise the dish did not taste any special to me. my memory of westlake kongbabao (which i had not been for maybe 15years) seemed better than this, and the ones a friend packet for me some months ago were certainly better.  i think my own braised belly pork or the ones at kuay chap stalls would also be tastier & better textured than this.