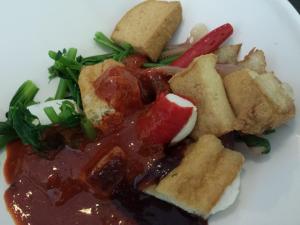 must say yong tau fu does not feature anywhere in my list. we were having meeting at chai chee & looking for some quick lunch place that was easy to park. driving/parking is such a chore sometimes.

our friend whose office is at chai chee & so the kingpin for the hour, decided on this bagus place which sure enough had plenty of parking next to the shophouses at changi road. 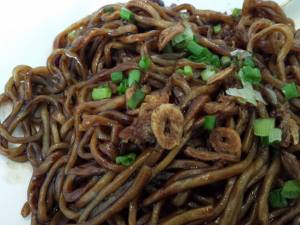 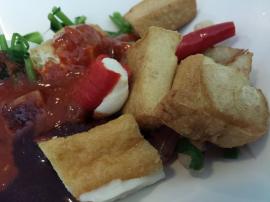 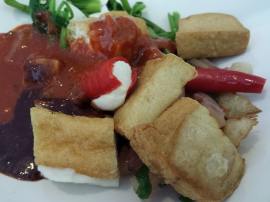 the 2 places i had yong tau fu very occasionally were chinatown’s “江鱼子” & tiong bahru yong tau fu at the corner coffeeshop at tiong poh road, PLUS the one at ghim moh market which my wife & daughter used to go more often before but not much now.

anyhow at bagus which is halal, they served a few variations – hakka, spicy chilli, laksa & the tau you la mian. i had the dry tau you la mian recommended by my friend & it was really quite good. the yong tau fu were good too, looking fresh & firm not soggy & tasty with the chilli & sweet sauce, except the red chilli piece which could look better but tasted ok. 🙂

it was quite ex though about S$17 for 3pax. i had 6 items + noodles, but these days most food court prices would be near S$6 anyway & if it were la mian, even more costly. yong tau fu not something i would look out for but if i were at the vicinity probably go there for simple healthy light lunch & ease of parking if cannot think of other eats. 🙂