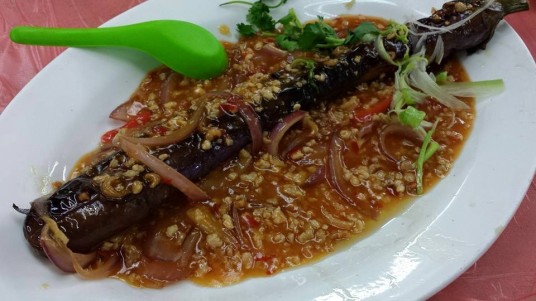 after a hot climb to see the 10,000 buddha monastery in 32degC though we were more sheltered from the scorching sun than the past 2 days, i had a sudden lost of motivation, a running out of steam.

so after lunch at LittleSheep mongkok 小肥羊旺角, we decided to ga back to royal park hotel at shatin to “recharge”. 🙂

i googled where to go for dinner & found this 富记大排档tai wai.

have google map will travel. it would not have been possible otherwise. the “thrill” led us to a market & food centre, just like we had at HDB estates. haha! 🙂

the kitchen was like any of our zi char 煮炒 kitchen. 🙂

we took the last table. place was full. say about 7 or 8 tables.

look at the plastic sheets covering this eating place, right next to the wet market. it is exactly like a korean pojangmacha 포장마차包藏马车 (those you see in korean dramas where the girl always get drunk & got piggyback home); or the japanese yatai at fukuoka, or izakayas 居酒屋。

there were some fresh seafood displayed. i did not see the tanks, so perhaps it was not the live seafood in some of the hong kong daipaidongs like what we had at chan kun kee 陈根记 the evening before.

we wouldn’t be able to take 1 chicken & not even 1/2 chicken if we want to try other dishes. also we just had salt baked chicken 盐焗鸡 at chan kun kee 陈根记 the evening before.

i ordered the eggplant.

on the board it showed “1 look”. pronounced in cantonese this means 1 whole roll. 🙂 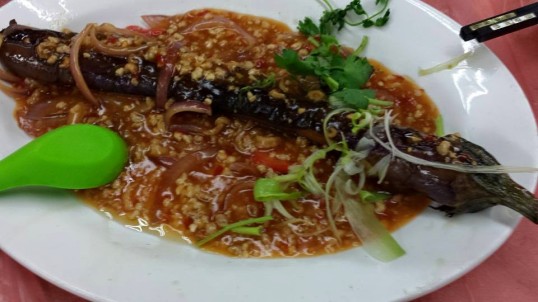 this dish is actually nothing new. we have it in most zi char stalls here, except that they are always cut brinjals & sometimes served in claypot. this “1 look” was quite an interesting presentation that in a way showcase the interesting, not-always-traditional cooking.

it was very expensive though, HK$68 for this dish at a market stall daipaidong..haha! whatever i am happy!^^

the 三式蒸蛋steamed egg with minced pork HK$52 was also a most reviewed dish. 🙂 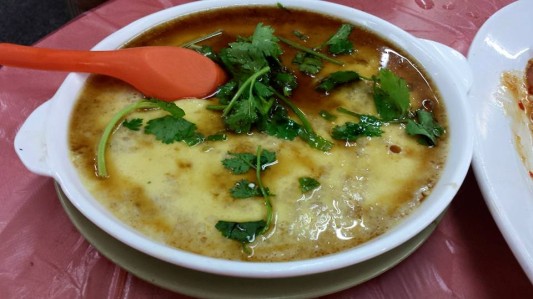 not sure where the 三式 3 styles were. the egg was quite nice, smooth, nothing special really, can do anytime at home. the sauce a bit salty, fortunately egg ok, so not ideal.

& again HK$52 was very expensive for this simple dish in this kind of market stall daipaidong. 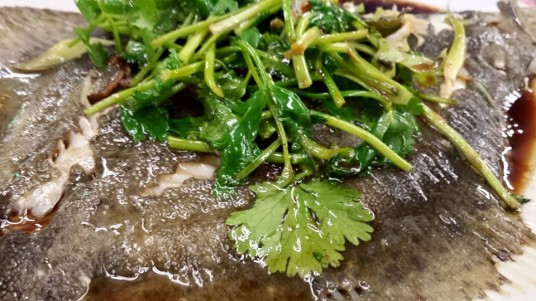 港蒸steamed HKstyle. it was very nice, though for comparison, turbot flesh was more rough 粗 c/w grouper so it was not quite the level of the steamed grouper at we had at chan kun kee 陈根记 the evening before. 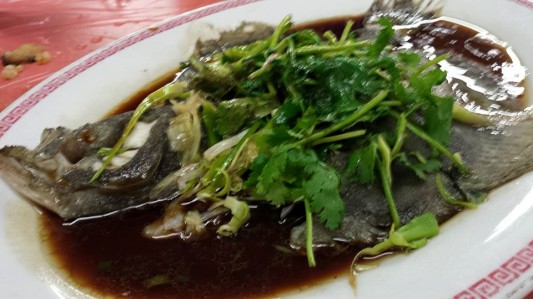 still, it was excellent dish for HK$98. i would take it again anytime! 🙂 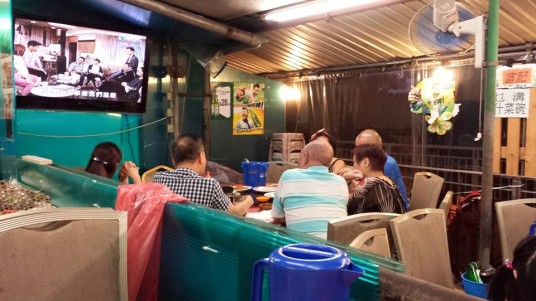 it was a great find for me. the thrill if the food trail!

i would not order the egg the next time, but i am ok to pay HK$68 for the eggplant. it was good even though not super & not unusual.

i would definitely try the hand-tear chicken 手撕鸡! just look at the photo of the standing chicken here, diners in plastic gloves ready to tear it apart!