we ordered a crabmeat seafood linguine & mussels. both dishes impressed us. later we ordered a roasted pineapples dessert. that too impressed, very much indeed. 🙂

we checked out before 11am from trevose harbour house B&B. we were taking the london sleeper from penzance station in the evening at 9.45pm.

over the last few days, we had been to-

st michael’s mount & gardens before lunch at mackerel sky at new street penzance before driving to st ives & walked around the beautiful city, harbour & beaches & had a sunset dining at porthmeor cafe on 12.5.2015

so today we were just walking around town, harbour & beach again & went to barbara hep ford museum before setting down to lunch at another beachside portminster cafe.^^

nice ambience, though not as captivating as the sunset dining at porter cafe. 🙂

the mussels were superb, superlative!^^ 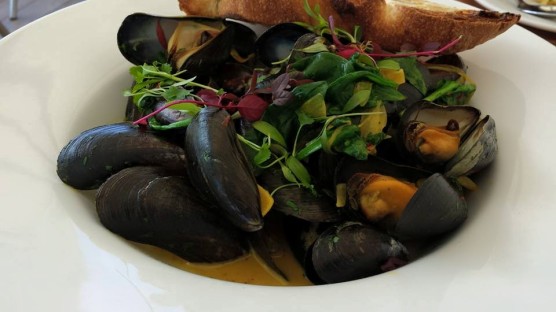 very tender, sweet & the gravy was excellent. i am going to try cooking this again, though i used the cheap local mussels in singapore. 🙂

the crabmeat seafood linguine was another huge pleaser!^^ 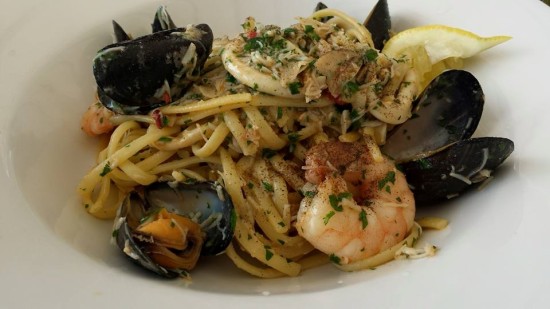 good prep crabmeat though very expensive in singapore, and the cheap ones i got from sheng shiong & ntuc were useless, and i sure not doing it from fresh crabs, so this has to stay as seafood linguine w/o crabmeat.

we were very impressed with the roasted pineapples. it came with lychees, coconut ice cream, a mango pudding & coconut flakes. i am going to do this myself but using fresh mango. ^^

the owner chef was born in australia. he published a cookbook which we flipped through while having lunch. i am going to try out couple of the dishes, a flamed squid & a curry cod (replacing the monkfish).^^