Cherian George…you are my new idol!

NTU don’t know what they missed that such an outstanding person as yourself could be denied tenure & have to find employment in HK..

PAP leaders should seriously listen to you!

all my friends, please listen to this guy…

agree with & learn from everything you said, in particular LKY’s incorruptibility & how Singapore is so lucky to have him!

i had expected a very professional analysis but with the usual fashionable western liberal emphasis on mr lee’s intolerance towards alternative views. after all  cherian george does have some very recent legitimate grievances with NTU denying tenure.

it is NTU’s & Singapore’s great loss that the man is now plying his trade in hong kong.

instead his depth & incisiveness demonstrated true intellectual honesty, moderation & balance in examining the issues and also genuine care for singapore’s future. it is a fair & balanced mind with respect for the truth (& equal respect for other human beings with difference of opinions) that is constantly considering, weighing alternative viewpoints & angles, & new facts & information.

cherian spoke as he believed. his was not some shallow piece beautifully crafted to appear to be balanced & fair in order to look good or to impress, which i see often these days circulated on the social media.

i liked his observation that mr lee was in fact more liberal & ahead of the curve than the present PAP leadership, that it is in fact the present leadership that is dogmatic clinging to past formulas of success rather than working from basic pragmatic principles of service & what’s good for singapore. in contrast, the founding fathers under the leadership of mr lee had been truly pragmatic, serving & delivering what was good & what worked for singapore & not constrained by dogma & ideology.

cherian’s humanity & generosity of heart really resonate with me. mr lee & his generation of leaders were pragmatic because they cared so much about the well being of the people of singapore. 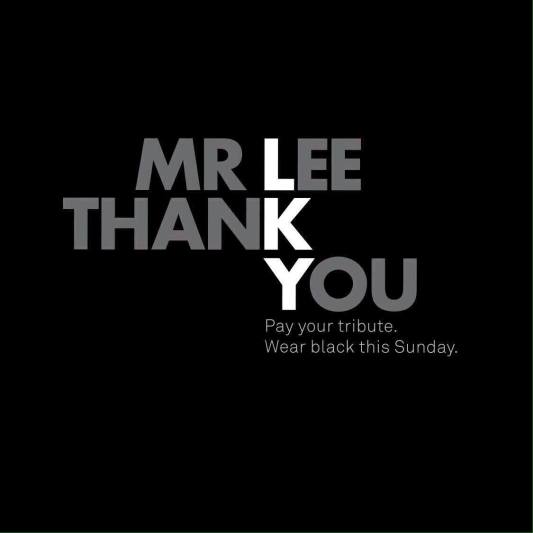 last night, i went with a good friend & started queueing for almost 2hrs from 2.35am to 4.30am to pay respects to our beloved first prime minister Mr Lee Kuan Yew.

Standing in queue at padang at 2.46am… about 2hr queue?

Really proud of my fellow Singaporeans standing in queue to pay respects. That so many understand gratitude & respect. .

It is so very sad that such a great & wonderful person like you is no more..

my feelings were no different with so many singaporeans from all walks of life who said that waiting in line for  whatever number of hours was the least they could do for Mr Lee who had given his entire life to singapore & made our lives immeasurably better!

my friend & i were really happy that we came to be part of this spontaneous outpouring of grief & gratitude for mr lee.

there were endless accolades from world leaders. i liked the tribute by henry kissinger especially.

both the new zealand parliament & australian parliament passed tribute motions & had many tribute speeches by leader of various parties.

singapore also had a special session of parliament with many moving tributes from minsters, PAP MPs, mr low thia khiang, leader of the opposition workers party, and NMPs. i was very moved that sylvia lim chairman of workers’ party (and like everyone else) were in tears.

genuine emotions are to be treasured. i never thought i would tear myself. but listening to the speeches & tributes, and what ordinary singaporeans said & the open display of emotions, i am very happy that i cried just like anyone else.

today i watched the rappler interview with cherian george, a singaporean writer and academic based in hong kong, to assess Lee Kuan Yew’s legacy and to take a peek at what’s ahead for singapore. he was just so good!