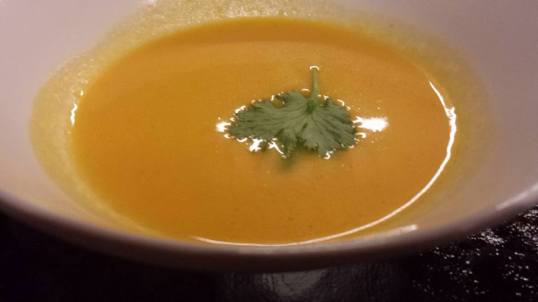 was doing a 10-course vegetarian dinner for my niece’s birthday recently.

one of the dishes i prepared was a cream of carrot soup. 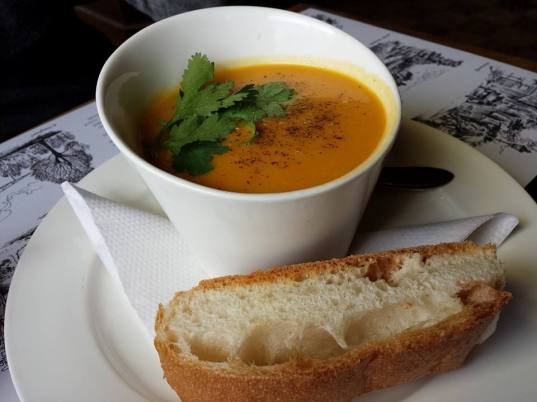 one of the best carrot soup i had was in amsterdam, a super tasty carrot coconut soup, on our way back after cycling the waterland route.

i am yet to try that. it is a bit adventurous with the coconut milk. i will try it one day before i serve it to my friends at dinner. 🙂

this was the very first time i did cream of carrot soup.

it was silky smooth & tasty, among the best soup i made.

i added a lot of sliced/cut vegetables – 1 onion, 1 stalk leek, 1 red pepper, 2 carrots (plus some leftover stems from spinach). i fried them in butter till soft, added 2-3 cups of vegetable stock for vegetarian (or chicken stock) & boiled for further 20mins. then i used a blender to blend & added salt & pepper to taste.

when about to serve, i added 3 tablespoon thick cream, and i have some chopped basil from my garden.

wanted to do an anniversary dinner for my wife & children. the logistics was such that it would be easier to do it earlier & then have dinner out with my wife on the actual day. hence 28.5.2015.

during our recent cornwall travels, we had great lunch at porthminster at st ives on 14.5.2015. we had a superb mussels & a charming roasted pineapples dessert.

also i saw the wonderful photos of a flamed squid in spinach sauce and a curry monkfish. so those were the dishes i had initially planned to do. i experimented on some dishes prior to 28.5.2015. 🙂

my mussels though did not turned up so great(blame it on the cheap local mussels from sheng shiong..haha!), so i decided on a carrot soup.

i tried a thai yellow curry for the first time, planning to replace monkfish with cod. & though the curry turned up beautifully (both looks & taste), my wife & i felt that cod was such a nice fish we should not overpower it with strong curry. so i decided to do a steamed cod instead.

as i was doing carrot soup, i decided to pair it with some oyster fritters, and since i am already at it (oil for deep fry, cornflower, egg & breadcrumb), might as well throw in some calamari.^^

i rolled the lightly seasoned oysters & calamari (squid) in corn flour, then egg, then breadcrumb. then placed them (just 4 or 5 pieces) in about 5cm hot oil a small sauce pan (to use less oil).

the oyster fritters were excellent, i must say, and first time i made them this way. i liked the calamari too, just cooked right nice texture, not rubbery & tough.

this was the very first time i did cream of carrot soup.

& it was excellent!^^ it was silky smooth & tasty, among the best soup i made.

i added a lot of sliced/cut vegetables – 1 onion, 1 stalk leek, 1 red pepper, 2 carrots (plus some leftover stems from spinach). i fried them in butter till soft, added 2 cups of chicken stock & boiled for further 20mins. then i used a blender to blend & added salt & pepper to taste.

when about to serve, i added 3 tablespoon thick cream, and i have some chopped basil from my garden.

this was the best dish of the evening, quite exquisite if i may say so, maybe alongside the soup.

the squid was done just right, excellent texture & taste, and with the bbq flamed flavours. & the sauce was  exquisite. ^^

i only saw the photos in the cookbook at porthminster. when i tried to google, there was nothing to be found, perhaps porthminster’s australian chef michael smith is not so famous. haha!

so i invented the recipe myself. practice made perfect though, so i had 1 practice some days before.

i cross cut (very closely) a large squid into 4 pieces (about 9cmx6cm), placed them on a pan & torched. i knew that’s was not enough to cook the squid, so fried them in butter afterwards.

for the sauce, again i used lots of vegetable to make it so tasty. i fried in butter 1/2 onion, 1/2 stalk leek, 1 green pepper & a bunch of spinach leafs. then i placed them in a blender & added 2 tablespoon extra virgin olive oil & salt & pepper to taste. such a wonderful sauce complementing the flamed squid.

there was not much to do regards the cod. i had done this once before & i know the simple olive oil with light soy sauce with chicken stock made a terrific stock base for the steamed cod. 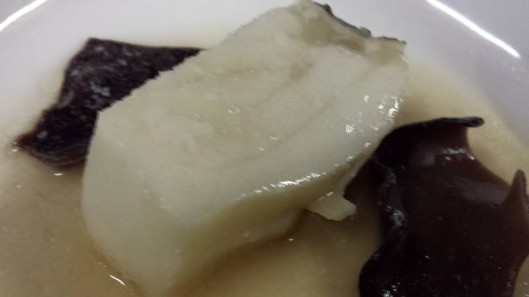 the cod was really wonderful. wife & children liked it very much.

for me & for my youngest daughter though, we still like the equally tasty teriyaki cod better. 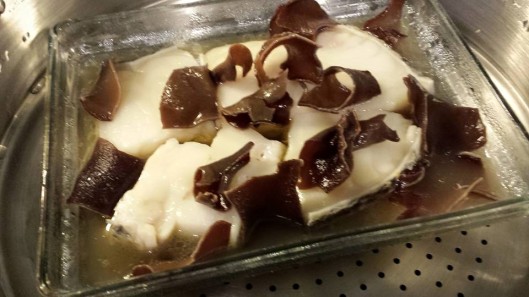 one mistake i made was with the wood fungus. first time i was doing this. apparently this was the wrong fungus. it was the crunchy type & not suitable. if i had looked more thoroughly i would have found the small ones in the shelves.

this was an easy dish to make. however i did not do it right this time & the lobster was overcooked & just slightly tough. wife & daughters said lobster was very tasty & flavourful but i knew meat being just right & being tough made a whole  world of difference. 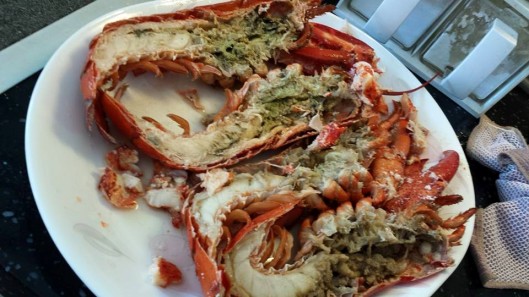 i cut the lobster in halves & shelled the pincers & legs. i put a lobe of butter in the pan & when it was very hot, i placed the lobster flat on the pan. then i added 2 tablespoon of brandy & flamed. the method was right, but i just did it a bit too long.

i tried to reproduce the roasted pineapples. this i didn’t practice, just use my imagination. unfortunately it was nothing like what we had at porthminster. haha! 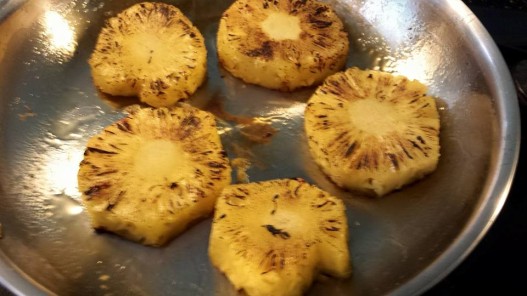 i torched the thick sliced pineapples. then i stewed them in lychee syrup. 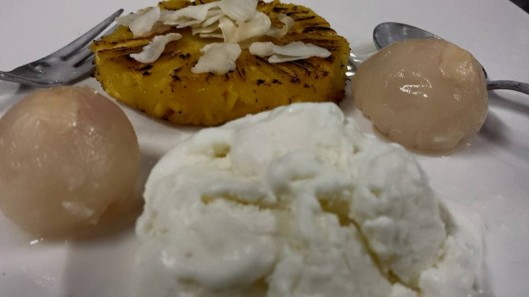 i served it with surprising coconut from daily scoop & lychees, and wife roasted some coconut flakes.

i guess it was immensely edible. anyway we were just eating fruit & ice cream so didn’t quite know what it was about.

nothing like the experience of the real thing – st ives porthminster chef michael smith’s roasted pineapples.^^