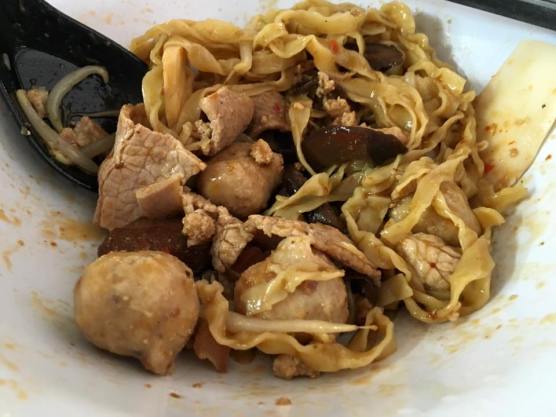 there’s a lot of buzz in the media & among friends lately about a japanese family who started a bakchormee mee stall at clementi west.

some of us were there at 11.30am. there was no queue yet. nearer 12pm we had about 6pax & started queueing. there were then about 4 to 5 persons in the queue. but shortly after the queue was 10+ long and continued so.

singaporeans vote with their feet. as one of the reviewers johorkaki said, if the food were not good, the hype would soon fixxle out.

so do i think it was that good?

there were loads of ingredients, i had 5 pork balls, 3 slices of shellfish, sliced pork, mushrooms &minced pork. there was no liver, or tipoh (the dried flatfish).

for me though, it could do with a bit more vinegar, and the chilli sauce though tasty, was not spicy & did not have the kick.

there was some garlic vinegar sauce i think, which a friend who was here for the 3rd time now said it was good, so i added that to the noodles & tossed.

i think it was similar to what we added to the ramen at Ichiran 一蘭 in fukuoka. it was nice, but somehow i still prefer the more fragrant black vinegar.

i certainly like this bakchormee here & will take it again, but it was not compelling or must have variety for me.

bakchormee was good & we had a great time among old friends 9 of us.

it is not something though i would specially drive myself to come & eat alone. unlike say my favourite ah heng curry chicken noodles at hong lim food centre; or