food taste was good actually. but it was quite expensive for the type of dishes & ingredients. we paid S$55 each.

some didn’t like the longevity buns so we had the deepfried mantous instead. they were nice though they didn’t fit into the dishes & perhaps the original longevity buns would do. 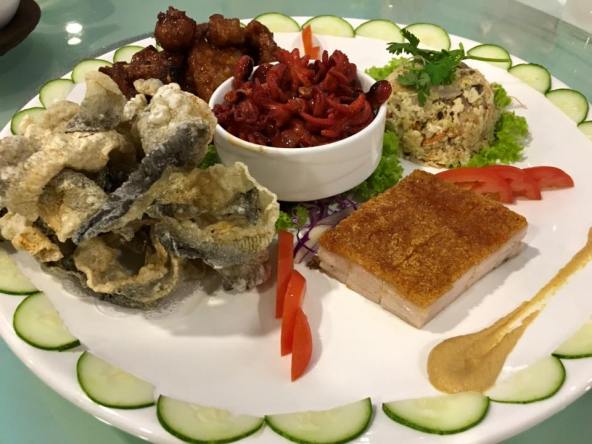 the cold dishes was quite good standard. all were quite tasty. roast pork nicely done & standard of any good restaurants like tunglok, imperial treasure etc.

fish skin, baby octopus, ribs & the egg were all good. 🙂 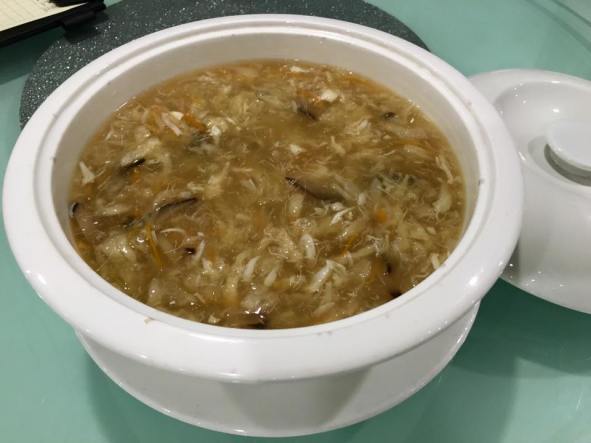 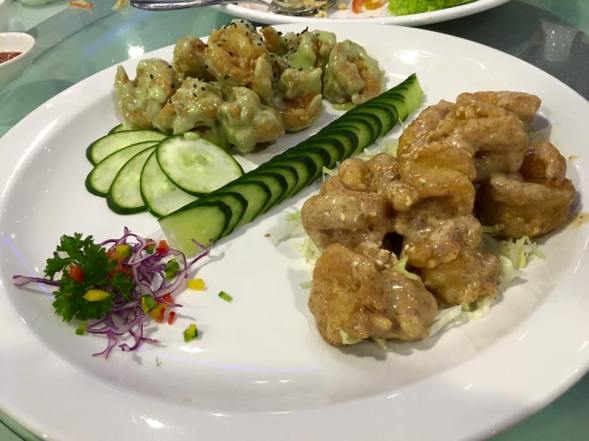 there was a wasabi & peanut sauce prawns.

both were very well down. same preparation deep-fried very nicely & added sauce. first time i had peanut sauce. it was good too. 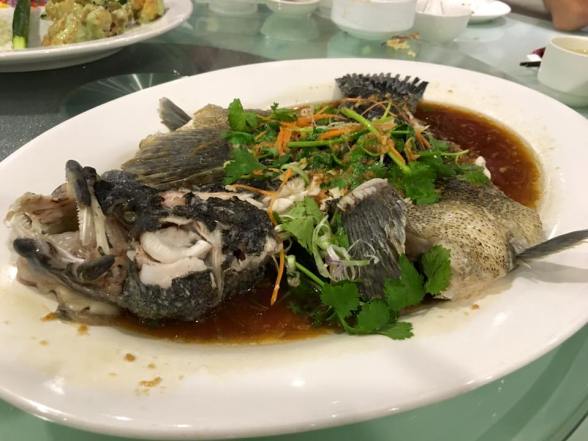 we had a large soon hock, probably 1 kg size. 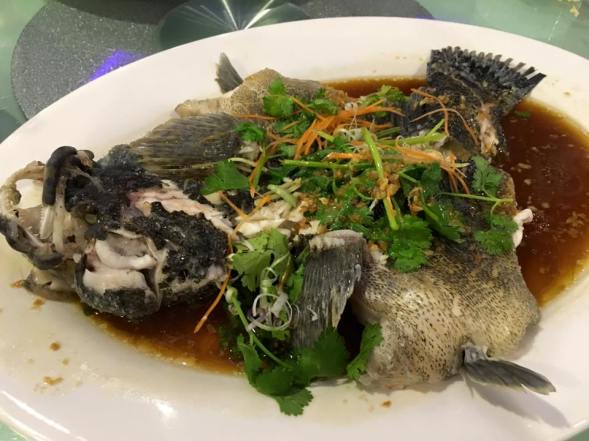 it was HK steamed 港蒸, very nicely done too, fresh, quite the perfect timing, very good.

the abalone dish was good standard but nothing special. 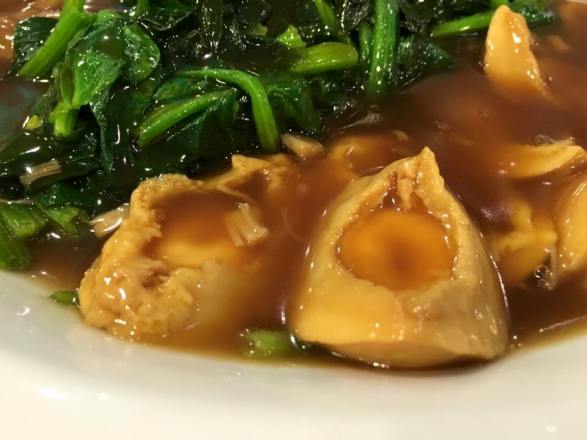 scallops & broccoli were all good. the basket was not yam basket but some potatoes, so so to me, no one took much.

sea coconut was the usual.

it was another wonderful evening of old friends coming together, great chat & sharing, strengthening of friendship & bonds.

overall the food was ok or good but pedestrian. nothing special except for the price, which was rather expensive at S$55nett each for the type of dishes. price was not outrageous but not great value also.

still between good value but mediocre food & this, i would rather have good standard food preparation & taste, and not so great value.

my friend suggested to have the steamed fish head which was good here.

we were still in dunman food centre, at level 2 that is. 🙂 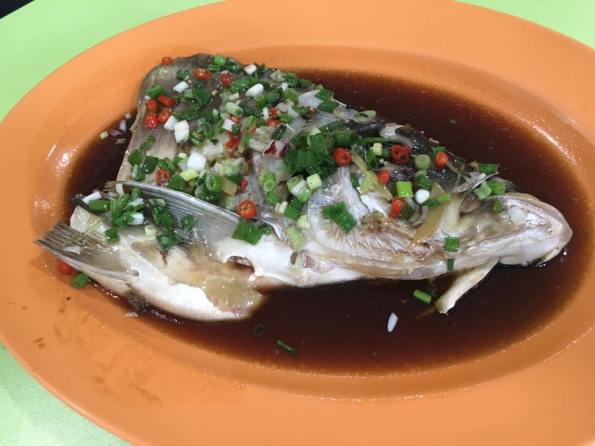 the fish head was the usual song fish head 松鱼头. 🙂 this was done the hk steamed 港蒸 style which i like also. i liked the spicy black bean sauce best ya…

fish was very fresh, and hk steam was a good preparation, nice taste of light soy sauce to bring out the sweetness of the fish. friend let me take the belly & eye, so i 不客气 la, just enjoy.

it was good. nothing special.

i think the香港街珍记 chun kee hong kong street is still the standard bearer for this dish.

i was looking around for ice kacang. the sing heng dessert stall was a bit hidden but i found it anyway. 🙂

at S$1.40 it’s probably the cheapest ice kacang in singapore. 🙂

the one i usually goes to is at adam road food centre. that is S$2, the usual price charged in most food centres.

i was thinking maybe they have a thing or 2 to learn from adam road when the lady  hardly added any evaporated milk. it’s like just a trickle whereas adam road pour like 20ml…lol.. onto the ice kacang.

surprisingly though, it was very good, even though i still prefer more evaporated milk. haha!

& that’s why i decided to record this. a good ice kacang.

to add to our song fish head hk steamed 港蒸松鱼头 lunch, we ordered pig liver & kidney soup & pig trotters from the stall selling them together with bakuteh & kueh chap. the stall proprietress is a vietnamese.

the soup was tasty, so maybe the bakuteh would be good. i won’t really want to try because the pig trotters was really bad & i lose confidence on the stall.

the pig liver & kidney were so so. i had much better ones…. 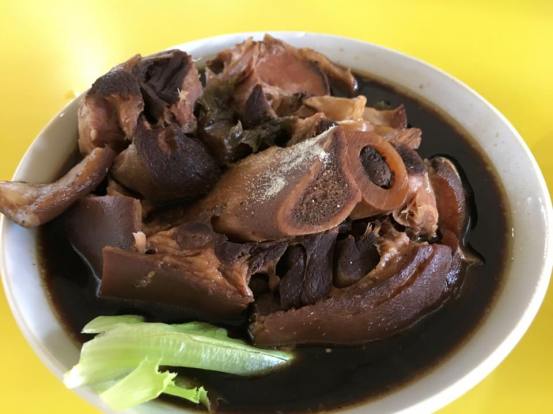 the pig trotters i think was a disaster! 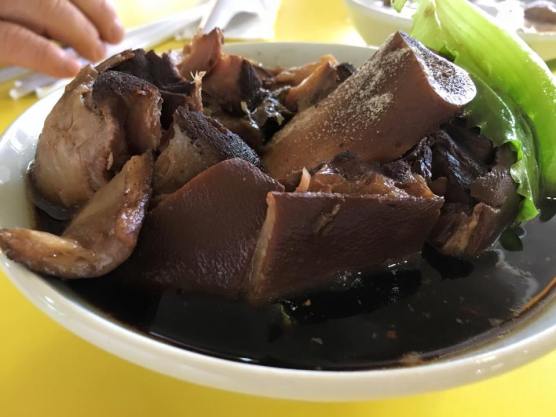 the braising sauce was tasteless. how could it be tasteless? 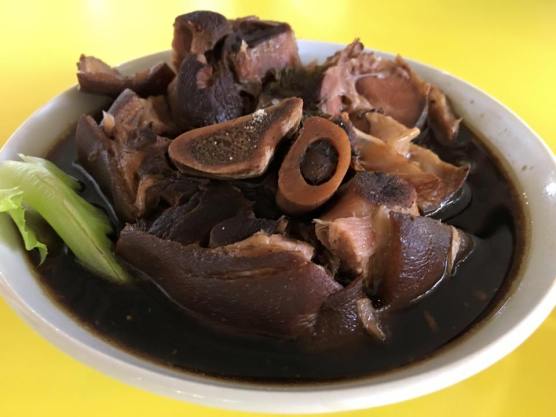 when i saw it, the colour & look were all wrong. maybe the taste & texture would be ok, but they were not, downright bad!

there was no gelatine texture & bite.

definitely a stall i will not try again.

was with my sis & b-i-l this morning & originally we drove to alexandra village to take the song fish head. but even at 11am the carparks were completely full & many cars were waiting.

we turned back out at bukit merah & queensway to go to hong kong street chun kee 香港街珍记 at commonwealth crescent, but decided to drop in at mei ling market & food centre to try out the stalls on 20.10.2015. 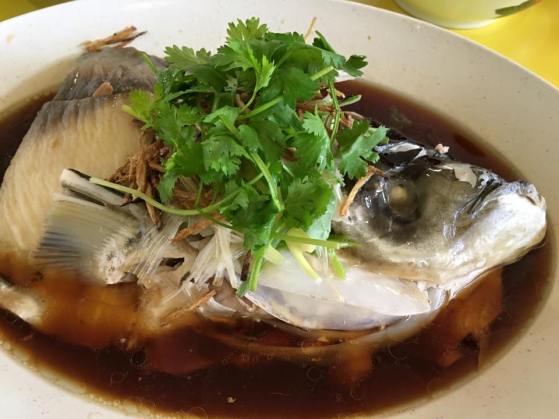 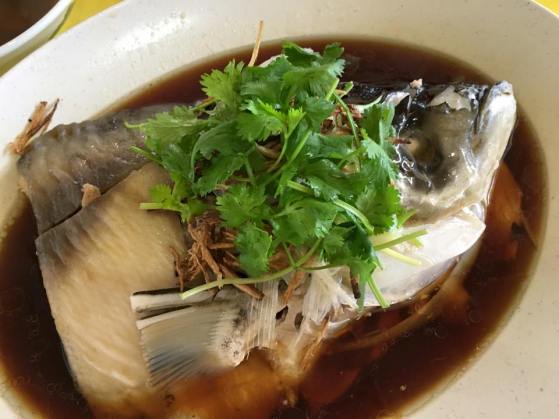 the song fish head hk steamed 港蒸松鱼头 was good, as good as the established places, not sure if the fish head was smaller? 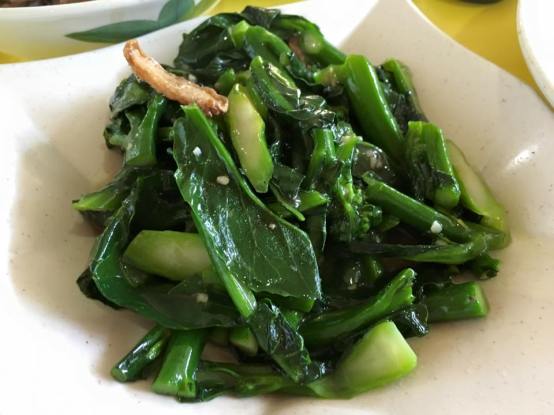 this stall actually quite good food for the price. becos we wanted to try the pig trotters etc from another stall we did not order other dishes.

not sure i will come specially for the zi char.  but if i do, i don’t mind to try their other dishes. 🙂 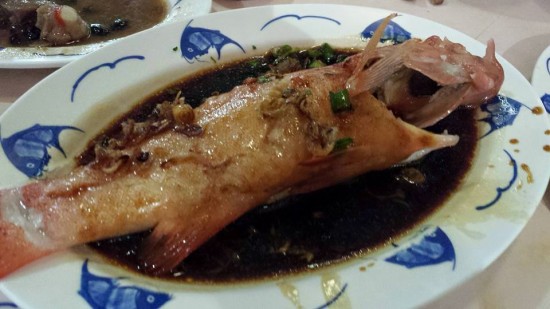 i asked for mullet 乌鱼 or ngoh soon (little treadfin) but they did not have either. i saw someone ordered the steamed red garoupa. it looked ok so i ordered one also.

i guess it was very good really, especially at S$9.50. we do it a lot better at home though, hk steam 港蒸 with lots of scallions, cut chilli & sliced chinese mushrooms.

so i take this often at home buying red garoupa from chinatown market. it would cost S$6 to S$7 at chinatown market fishmonger stalls for this size (400g) so S$9.50 was pretty good. 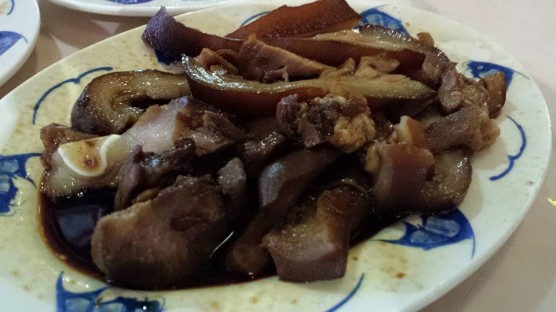 we ordered the pig head skin 猪头皮. this was really good. texture was perfect & taste excellent.

shark meat 鲨鱼肉 was good too. i seldom take this dish. usually it is either fried stingray done in a similar way (which is very good) OR chilled shark meat 鲨鱼冻.

& i just love the salted fish minced pork or 咸鱼饼. ^^

we had spinach. good too.

last evening i arranged a birthday dinner for him at ah yat seafood @ grandstand turf club road on 4.1.2015. 🙂

happens that my god-sis & her husband’s birthday were also just past, so we had a 6pax dinner together with my other 2 close friends.

i ordered the 6pax lobster sharkskin abalone 9-course dinner. it was very good, quite expected. the place was crowded & noisy like a fish market, with 2 tables next to us having endless drinking challenge & making a din. we used to say that the place did not matter since we would be the table making the most noise. this time though we were not. ^^

anyway, the birthday boys & girl were all happy with the trade-off – good food for fish market noises. 🙂

#2 sharksfin soup was sweet & tastier than i expected, but not quite the standard of ah yat abalones forum restaurant. 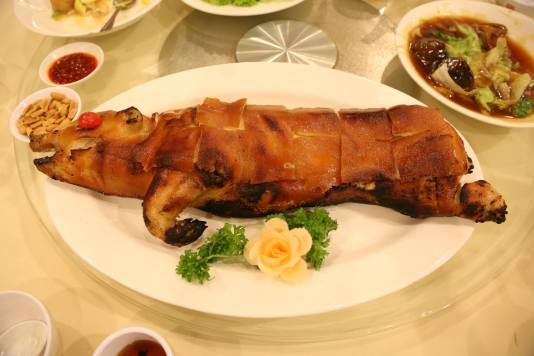 #3 suckling pig – this was so good

#3 suckling pig – this was so good

the #3 suckling pig was really par excellence. it was so good, crispy & tasty, equal or better than the suckling pig  at hung kang or at summer garden SAFRA mt faber. 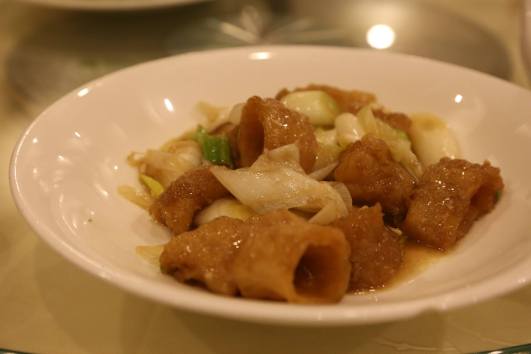 #4 fish maw with leeks was good too. not the expensive 花胶. still a tasty dish.

i enjoyed the #7 fried suckling pig meat too, but really i thought just chopping up the meat & head would be just as good. 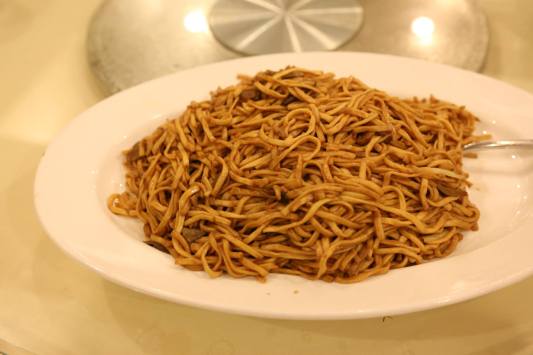 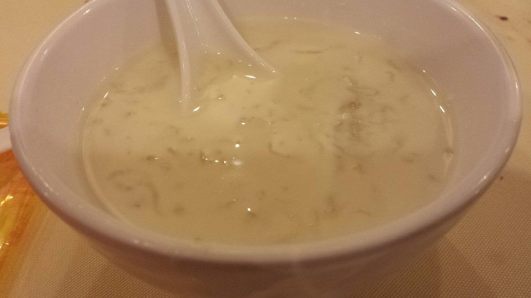 #9 bird’s nest was kind of forgettable dish for me, zero impact.